Posted on December 7, 2018 by Claude Mariottini

The Society of Biblical Literature (SBL) is offering a free book published in its Ancient Near East Monograph Series. Below is a description of the Ancient Near East Monograph Series published by the SBL: “The focus of this ambitious series is on the ancient Near East, including ancient Israel and its literature, from the early Neolithic to the early Hellenistic eras. Studies that are heavily philological or archaeological are both suited to this series, and can take full advantage of the hypertext capabilities of ‘born digital’ publication.” 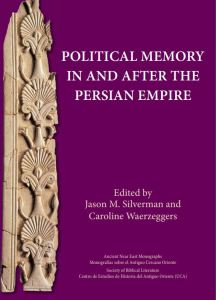 Political Memory in and after the Persian Empire
Jason M. Silverman and Caroline Waerzeggers, editors

Various disciplines that deal with Achaemenid rule offer starkly different assessments of Persian kingship. While Assyriologists treat Cyrus’s heirs as legitimate successors of the Babylonian kings, biblical scholars often speak of a “kingless era” in which the priesthood took over the function of the Davidic monarch. Egyptologists see their land as uniquely independently minded despite conquests, while Hellenistic scholarship tends to evaluate the interface between Hellenism and native traditions without reference to the previous two centuries of Persian rule. This volume brings together in dialogue a broad array of scholars with the goal of seeking a broader context for assessing Persian kingship through the anthropological concept of political memory.

This free book was edited by Jason M. Silverman and Caroline Waerzeggers.