Reading the Bible in 2014 – A Second Invitation

Posted on December 31, 2013 by Claude Mariottini 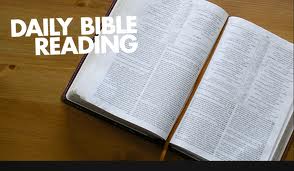 As a professor of Old Testament, a problem I face every year is that many students who come to seminary to prepare themselves for the work of the ministry do not have a basic knowledge of the Bible as Christians of previous generations once had.

When seminary students begin their study of the Bible today, their knowledge of the Old Testament (and of the New Testament for that matter) is very superficial. They know the words of a few verses and they are familiar with a few stories that appear in the Old Testament, but they lack an integrated knowledge of the story that begins in the book of Genesis and ends in the book of Revelation.

I believe there are two reasons for this unfortunate problem of biblical illiteracy that is prevalent among Christians today. One of the reasons is the lack of Bible teaching in most churches today.  While most churches emphasize the application of biblical truths to social, moral, and personal problems, churches do not teach biblical content.

The second reason for the rise of biblical illiteracy in our churches today is the decline of strong biblical teaching from most pulpits. While most pastors sound more like sociologists, psychiatrists, or therapists, few pastors take the time to teach the content of the Bible in their sermons. Feel good sermons do not promote knowledge of the content of the Old or New Testaments.

This lack of commitment to teach biblical content from the pulpit creates a crisis of knowledge in our churches. The problem of biblical illiteracy is seen in the fact that many lay leaders in our churches today (dare I say pastors also?), people who are involved in the work and ministry of the church, do not know the content of the Bible.

In a previous post, I wrote about a survey published in Christianity Today:

Several years ago, Christianity Today published an article in which Richard Morgan severely criticized the scandal of biblical illiteracy that prevails in the churches. Morgan presented the results of a test given to 150 freshmen in a Christian college. These students were selected because they were active members of evangelical churches and because they grew up going to church. The result of the test re-emphasizes the facts that today’s church is facing a crisis of knowledge. What Morgan discovered almost a half century ago, has been compounded and intensified in recent times.

The answers that students gave to the questions on the test were startling. The history of Abraham was found in the book of Ruth. The greatest event described in the Old Testament was the Roman persecution. The Exodus was the return of the Jews to Palestine after World War II. Jesus gave the Ten Commandments to Israel on the Mount of Olives. Some of the Wisdom books of the Old Testament are: the Book of Acts, Paradise Lost, and The Lord of the Flies. Genesis was the first Gospel; the name of the Hebrew heroine who saved the Jews from the hands of Haman was Joan of Arc. The mother-in-law of Ruth was Mary Magdalene and her famous great-grandson was Noah. Jesus was baptized in the Red Sea, was betrayed by Samson, and died in Bethlehem.

These answers may not reflect the intellectual abilities of those students, but they reflect the crisis facing the church today. The answers indicate that there is a lack of adequate biblical knowledge among church members and this biblical illiteracy may betray the kind of religious education churches are offering to their members.

The problem of biblical illiteracy happens because few people go to Sunday School and because few Christians today read their Bibles at home or try to learn the biblical story as a whole.

Several months ago I was talking to a wonderful Christian lady about the joys of studying the Bible. When I identified myself as a professor of Old Testament, this lady told me how much she loved the Old Testament.

She had read the whole Bible many times. She told me that she was reading the Bible from Genesis to Revelation again. But she said: “I am reading Chronicles now, but I have skipped the genealogies in 1 Chronicles.” I told her that she was skipping the most important chapters of 1 Chronicles.

Anyone who wants to read the whole Bible from Genesis to Revelation but skips 1 Chronicles 1-9 is not reading the whole Bible. Once I asked my class the following: “If you have read every chapter and every verse from Genesis to Revelation at least once, raise your hand.” Out of 25 students who were studying for the ministry, only 5 or 6 raised their hands.

There are many methods and approaches to reading the whole Bible. I suggest BibleGateway’s Comprehensive Bible Reading Plan (365 Days). This plan will help you read the whole Bible cover to cover. As the program says, “As you read, ask the Lord to help you see the redemptive story of the Bible. It’s the heartbeat of every book from Genesis to Revelation.”

14 Responses to Reading the Bible in 2014 – A Second Invitation