The Long Day of Joshua – Part 3

Posted on February 28, 2022 by Claude Mariottini 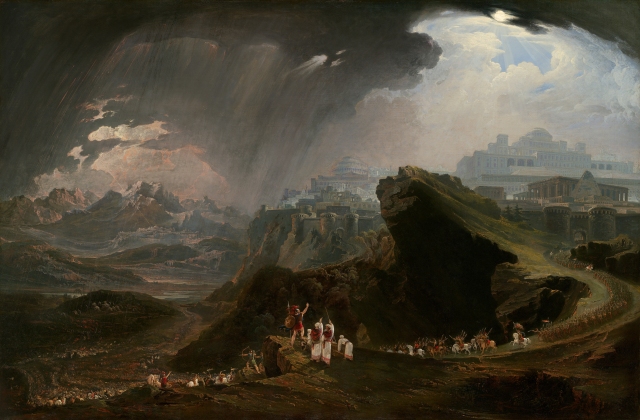 If you have not read Part 1 and Part 2 of this study on the long day of Joshua, you should read them before you read Part 3.

The next item to be discussed is the storm that decimated the army of the Amorites. In Scriptures, God often uses storms as his allies in helping the Israelites defeat their enemies. One of these storms was the storm already mentioned in Judges 5:20–21:

The poem in Judges 5 is a poetic rendition of the events in chapter 4. The words in verse 20, “From heaven the stars fought,” are a reference to a violent rainstorm that brought about a great downfall of rain and caused the wadi Kishon to rise fast. The mud produced by the flood caused the chariots of Sisera to get stuck, forced Sisera to flee on foot, and allowed the army of Israel to defeat the Canaanites.

Another storm sent by God to aid the people of Israel was the seventh sign against the Pharaoh of Egypt. The sign was a violent thunderstorm that was accompanied both by a hailstorm and lightning. According to the biblical text, the storm was so huge that there had never been a storm like it in Egypt in all of its history. That hailstorm was “the heaviest hail to fall that has ever fallen in Egypt from the day it was founded” (Exodus 9:18). The hailstones were big enough that they had the potential to kill every man and beast that was in the field (Exodus 9:19).

In this sign to Pharaoh, it is the intensity of the storm that is emphasized as the work of God. The thunder, lighting, and hail acted as God’s agents of judgment. The hail was devastating to animals and plants. As in the previous plague, the people of Israel were spared from the devastation.

In Scripture, hail serves as a tool of divine judgment. Hail is often associated with theophanies (Psalm 18:12–13) and God’s judgment upon Israel’s enemies. There are several examples where hailstones are used as agents of God for judgment:

And the LORD will cause his majestic voice to be heard and the descending blow of his arm to be seen, in furious anger and a flame of devouring fire, with a cloudburst and storm and hailstones. The Assyrians will be terror-stricken at the voice of the LORD, when he strikes with his rod (Isaiah 30:30–31).

With pestilence and bloodshed I will enter into judgment with [Gog], and I will rain upon him and his hordes and the many peoples who are with him torrential rains and hailstones, fire and sulfur (Ezekiel 38:22).

Thus, it was the intensity of the storm in Joshua 10 that is being emphasized as the agent of God in decimating the army of the Amorites. In my previous post I wrote:

When Joshua came to fight against the Amorites, he came at night and caught them by surprise. Joshua was aided by the darkness caused by a huge storm that produced hail so big that it killed many people. In fact, the biblical text says that more people died from the hailstones than the people of Israel killed with the sword.

Two questions may be raised about the storm that deserve attention. First, can the hailstones be so big that they could kill people? The answer seems to be “yes.” It is doubtful that the “stones from heaven” were meteorites (as someone has written) since the stones only decimated the Amorite army. The text itself affirms that the stones were hailstones.

In announcing the storm, Moses warned Pharaoh that the hailstones could kill people and animals. He told Pharaoh:

Now therefore send, get your livestock and all that you have in the field into safe shelter, for every man and beast that is in the field and is not brought home will die when the hail falls on them (Exodus 9:19).

The writer of the book of Revelation describes one of the plagues that will come as part of the divine judgment:

And great hailstones, about one hundred pounds each, fell from heaven on people; and they cursed God for the plague of the hail, because the plague was so severe (Revelation 16:21).

It is hard to imagine hailstones weighing one hundred pounds each, but this is the image of divine judgment coming upon God’s enemy. Since hailstorms last no more than 30 minutes, maybe the miracle of the long day of Joshua was the duration of the darkness produced by storm, that is, that it lasted a long time, long enough to decimate the Amorite army.

The second issue is the discussion of the words דום and עמד as they appear in Joshua 10:12–13.

“Then Joshua spoke to the Lord, in the day when the Lord gave the Amorite before the children of Israel, and he said in the sight of Israel: “Sun, be silent דום in Gibeon, and moon in the valley of Aijalon.”

“And the sun was silent דום and the moon stood עמד until the nation took vengeance on its enemy. Is this not written in the Book of Jashar? The sun stood עמד in the midst of heaven and did not hasten to go for almost a whole day” (the translation is mine).

Joshua’s request is clear from the text: “Sun, be silent דום in Gibeon, and moon [be silent also] in the valley of Aijalon.” Since in verse 12 there is no command to the moon, it is clear that the same command, to be silent, is implied.

As a result of Joshua’s request, “the sun was silent דום and the moon stood עמד ” just as Joshua had requested. And to prove that this actually happened, the biblical writer quotes the book of Jashar as evidence: “The sun stood עמד in the midst of heaven and did not hasten to go for a whole day.”

Many people believe that the long day of Joshua was a complete day, a day with 24 hours of light. But this is not what the Hebrew text says. The text says that it was כְּיוֹם תָּמִים, keyôm tāmîm, “like a whole day.”

Thus, the book of Jashar gives the impression that the sun stood still in the midst of heaven all day, creating, what is popularly known as “ the missing day in the universe (See Part 1), a day that never existed.

The book of Jashar is mentioned twice in Scriptures: once in Joshua 10:13 and once in 2 Samuel 1:17–18. The latter passage says that David’s lament over Saul and over Jonathan was written in the book of Jashar.

Had the biblical writer used Joshua’s words only, scholars would not be discussing whether or not the sun stood still, but since he chose to introduce the writings of an unknown writer into the biblical material, scholars now have to deal, not with what happened, but with the interpretation of what happened, an interpretation that was written centuries after the event by someone who was not even an eyewitness of the event. The best interpreter of what happened at the battle of Gibeon is not the writer of the book of Jashar, nor his words, but Joshua and what his words requested.

In conclusion, it seems that what Joshua desired was more darkness and not more light. The biblical narrative, minus the interpretation of the event in the book of Jashar, does not support the interpretation that the sun stood in place for almost a whole day or that there is a day missing in the universe.

This entry was posted in Book of Joshua, Joshua and tagged Battle of Gibeon, Josua, Long Day of Joshua. Bookmark the permalink.