In Search of the Ark of the Covenant

Posted on January 9, 2014 by Claude Mariottini 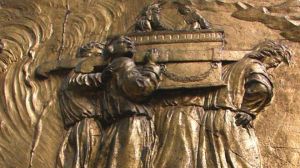 Image: The Ark of the Covenant being carried

According to an article published in Live Science, an ancient Hebrew text reveals where the treasures from Solomon’s temple were hidden. This same text also mentions what happened to the Ark of the Covenant.

Below is an excerpt from the article:

A newly translated Hebrew tells a tale claiming to reveal where treasures from King Solomon’s temple were hidden and discusses the fate of the Ark of the Covenant itself.

But unlike the Indiana Jones movie “Raiders of the Lost Ark,” the text leaves the exact location of the Ark unclear and states that it, and the other treasures, “shall not be revealed until the day of the coming of the Messiah son of David ” putting it out of reach of any would-be treasure seeker. But don’t put on your Indiana Jones costume just yet; the text’s translator says the book is likely just early Jewish folklore.

King Solomon’s Temple, also called the First Temple, was plundered and torched by the Babylonian King Nebuchadnezzar II in the sixth century B.C., according to the Hebrew Bible. The Ark of the Covenant is a chest that, when originally built, was said to have held tablets containing the 10 commandments. It was housed in Solomon’s Temple, a place that contained many different treasures. [Religious Mysteries: 8 Alleged Relics of Jesus]

The newly translated text, called “Treatise of the Vessels” (Massekhet Kelim in Hebrew), says the “treasures were concealed by a number of Levites and prophets.”

The article says the story told by this Hebrew text is not factual, but it presents an interesting view of how legends about the Ark of the Covenant developed in the past.

You can read the article in its entirety here.