Jeremiah and Hananiah: True and False Prophecy in Israel

Posted on December 9, 2008 by Claude Mariottini 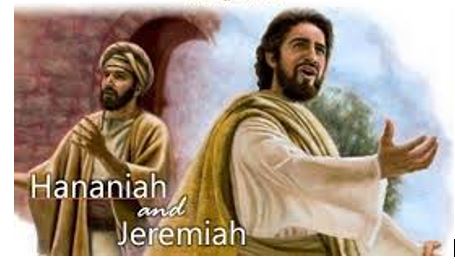 The encounter between Jeremiah and Hananiah, two prominent prophets with different views of Yahweh’s work, must have divided the people listening to them. Who spoke the words of Yahweh? Both prophets used the prophetic formula “Thus says the Lord” to proclaim their message. Both prophets employed their knowledge and understanding of the prophetic tradition. This confrontation between Jeremiah and Hananiah raised a problem which must have perplexed their audience profoundly: how could one tell which prophet was speaking a message from Yahweh? When two prophets speak in the name of Yahweh and present contradictory messages, the audience must decide which message is the true message from God.

Both prophets presented true aspects of God’s work in the history of Israel. While Jeremiah spoke of Yahweh’s coming judgment upon Judah, Hananiah spoke of God’s faithfulness in delivering the nation. However, only one of them was delivering the right message, a message that was directly related to the historical situation in which they lived.

An analysis of the background of this prophetic encounter in the temple helps us understand the theological presuppositions each prophet brought to the situation.

It is evident that both Jeremiah and Hananiah were well versed in Israel’s ancient religious traditions and were familiar with the many stories of Yahweh’s mighty deeds done in the history of the nation. Out of their understanding of these ancient traditions came each prophet’s view of reality.

Prophecy can be defined as the prophet’s self-understanding of what Yahweh was doing in accomplishing his purpose in the history of Israel. For this reason, in formulating the right relationship between faith and history, the prophets addressed themselves to foreign and domestic policies, applying their understanding of the faith of Israel to current events. This application of faith to historical and political events generally was manifested by the prophets’ affirmation of Yahweh as creator, redeemer, and judge, and in their perception that Yahweh was involved in current events.

In the case of Jeremiah, while Hananiah and the religious and political leaders of Judah saw Nebuchadnezzar’s invasion and the deportation of the people to Babylon as a national tragedy, Jeremiah saw the invasion as Yahweh’s exercise of divine sovereignty in judging his people. While Jeremiah saw Nebuchadnezzar as Yahweh’s servant, doing Yahweh’s will, Hananiah saw the Babylonian invasion as a gross injustice which Yahweh would reverse by punishing Nebuchadnezzar. While Jeremiah saw Yahweh as a sovereign God over the nations, free to use whomever he desired to accomplish his purpose, Hananiah saw God as the guarantor of his promise to protect Judah notwithstanding her behavior. Jeremiah saw Yahweh as a God who in his righteousness would judge the nation but who in his great mercy would forgive the wayward nation and restore her by establishing a new covenant which would motivate the nation once again to know him and call on his name alone.

During the confrontation between Jeremiah and Hananiah, the people present in the temple were unable to make a clear decision on who was proclaiming a true message from Yahweh because it was impossible to tell the true from the false prophet. The fulfillment of the prophet’s words proved that the prophet’s oracle was true (Deuteronomy 18:22). In fact, apart from fact that the people knew that God revealed his will to the prophets, the people had no immediate objective criterion by which the claim of a prophet could be proved. The claim of who was proclaiming the true word of Yahweh, of who was right and who was wrong was subjective and only the fulfillment of the prophet’s words could prove the validity of a prophetic claim.

There was no firm set of criteria for distinguishing a true prophet from a false one. Ultimately, only the prophet himself could judge another prophet’s message to be false and then only on the basis of a fresh revelation from God. This is what happened in the confrontation between Jeremiah and Hananiah.

While Jeremiah appeared confident that he was proclaiming God’s will to the people, the strength of Hananiah’s conviction about Yahweh’s plan to restore Jehoiachin and the sacred vessels temporarily caused Jeremiah to hesitate in view of the possibility that maybe Yahweh had changed his mind about the Babylonians and their role in the domination of Judah.

As mentioned above, there are no clear set of criteria to distinguish true prophecies from false ones, primarily at the time the prophecy is uttered. There are several reasons for this problem. First, one cannot necessarily evaluate a prophecy by the theology presented in an oracle because a false prophet can often use good theology and apply it at the wrong time, as Hananiah did. Rather, it is in the fulfillment of the prophetic words, often many years later, that true prophecy can be distinguished from false prophecy.

False prophets prophesy about “wine and beer” (Micah 2:11), they fill the people with false hopes, they speak visions from their own minds (Jeremiah 23:16), they commit adultery and live a lie, they strengthen the hands of evildoers, and their message does not turn the people from their wickedness (Jeremiah 23:14).

The true prophet, the one called and sent by God is filled with divine power, with justice and might to speak by the Spirit of the LORD and declare to people their transgression and rebuke them for their sins (Micah 3:8).

The people at the temple, however, could draw on past prophetic traditions to find help in deciding who was speaking the true word of God. First, true prophets proclaimed that Yahweh was sovereign over the nations and the redeemer of Israel while false prophets recognized Yahweh only as the redeemer of Israel. False prophets were exclusivists: they believed that Yahweh would protect Israel from her enemies but they could not accept Yahweh’s freedom to choose a foreign nation to serve as a rod of punishment for the sins of Israel.

There is much to learn about true and false prophets from the encounter between Jeremiah and Hananiah. In the twenty-first century the church is being challenged by people who claim to speak a message from God but who preach a message that does not reflect the teachings of the New Testament. Christians must be aware that even today there are people who speak on behalf of God but who were not sent by God (Jeremiah 23:21).

Studies on Jeremiah and Hananiah

Jeremiah and Hananiah: The Historical Context

Jeremiah and Hananiah: The Confrontation in the Temple

Jeremiah and Hananiah: True and False Prophecy in Israel