My Ministry as a Professor

It is amazing how God works in the lives of his people. In my almost sixty years of being a Christian, one important thing I have learned about this wonderful God we serve is that our plans are never God’s plans.

In our service to Christ, we have to learn never to say “no” to God. When I finished my Ph.D. at Southern Baptist Seminary in 1988, my wife and I had to decide where we would spend the rest of our lives in ministry. At that time, we had to consider four invitations available to us for service.

After Donna and I prayed, we agreed that we were not willing to go to Missouri, Chicago, or New York. Our hearts were set to return to California, but the invitation to serve in Miami was the best offer available to us. Just before we made our final decision, I was invited to teach Old Testament at Southwest Baptist University in Bolivar, Missouri. I was surprised by joy because I had never considered going to Missouri. I accepted the invitation and spent five wonderful years at SBU. My family and I loved Missouri. We made lifetime friends there.

I came to Northern Baptist Seminary in 1988. Chicago was the last place on earth where I wanted to live and work, but God had other plans. Although in my mind I believed I would spend only five years in Chicago, I taught at Northern for twenty-eight years, the best and the most productive years of my life.

Many people don’t know Northern Seminary, but they should. Northern Seminary is a place where people love the Lord. The seminary is committed to the preparation of men and women for the work of the ministry and to become leaders in the church of Jesus Christ. Northern’s vision “is to prepare leaders who will faithfully serve Jesus Christ with evangelical passion and mission skills in biblically grounded and culturally relevant ministries.”

Another favorite course was “Women in the Old Testament.” In this course we studied the lives of the many women who made a difference in the life of the people of Israel. One thing I liked to emphasize in this course was that most people today do not fully comprehend the important role women played in Israelite society.

My years as a teacher at Northern Seminary were filled with joy and happiness. I worked with an amazing group of colleagues. The men and women who teach at Northern Seminary are an amazing group of people who are truly committed to their students. They are publishing important books that are designed to speak to the church and help pastors and students in their spiritual development.

Another source of joy was teaching students who were hungry to know more about the Old Testament. My students blessed me more that I was able to bless them. They challenged me to study hard and in the process, I became a better teacher. To all my students, I say thank you. Thank you for your words of encouragement and for the contribution you made to our classes through dialogue and your papers (do you still remember your Turabian?).

On June 10, 2017, during the last graduation ceremony I attended, Dr. Bill Shiell, President of Northern Baptist Seminary announced that the Board of Trustees of the seminary voted to elect me Professor Emeritus of Old Testament. I am humbled for this recognition because the Board honored me for the work I always loved doing.

Below are the words President Shiell spoke at the announcement of the vote: 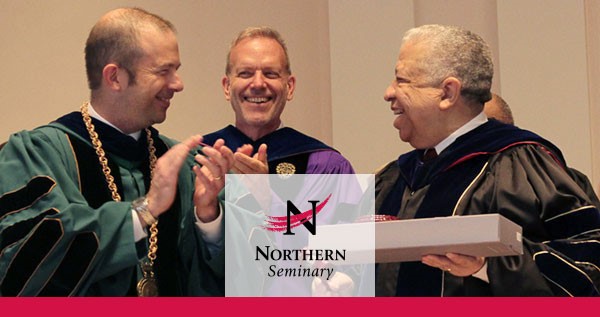 In 1963, the same year Northern Seminary moved to Lombard, a young Claude Mariottini was called into the President’s office of the Bethel Seminary in Rio de Janeiro, Brazil, and offered an opportunity to travel to America for further study. The seminary President encouraged Claude and his good friend Jerry to further their education in the States. The only problem was the President had no money to send them. After several letters and appeals, the President of Brazil awarded Claude and Jerry a gift of $1,000 each to travel to the States to pursue a degree. That journey led Claude and eventually his wife Donna to Northern Seminary 28 years ago.

Claude has taught over 1,500 alumni to love the Old Testament and to discover God’s grace in new and fresh ways. His blogs, publications, and sermons have touched 100,000s of lives. We will only see the full fruits of his labor in heaven.

Claude lives by two life verses: “Those who honor me I will honor” from 1 Samuel 20 and Romans 8:31-32—“What shall we say in response to all this?… If God be for us, who can be against us . . . . In all these things we are more than conquerors through him who loved us.”

Claude, you are a friend, colleague, trusted guide, and treasure. There will never by a faculty marshal like you. You have taught us to love the Old Testament and the Turabian manual of style. Your attention to detail in every aspect of life has shown us the importance of giving our best to the Master.

Last night we had the privilege of presenting Claude several gifts, a check, and a book of letters honoring his retirement. The Board of Trustees also had the opportunity to consider a recommendation from the faculty that Claude be named “Professor Emeritus.”

Emeritus Status is only awarded when a faculty member has attained compelling recognition as both a scholar and professor and has brought long and distinguished service to the training of leaders at Northern Seminary.

Claude, you have not only attained but exceeded all the expectations of anyone in your position. We are so grateful that the seminary President in Rio and the President of Brazil made a way for you to come to the States.

So, upon recommendation of the faculty, The Board of Trustees is pleased to appoint our retiring faculty member, Dr. Claude Mariottini, Professor of Old Testament Studies, to the honorific rank of Professor Emeritus.

I have no words to express the honor Northern Seminary and the Board of Trustees bestowed on me by naming me Professor Emeritus. The only thing I can say is “Glory be to God.”

10 Responses to My Ministry as a Professor