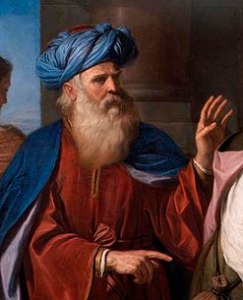 When God asked Abraham to sacrifice his son Isaac, Abraham, in obedience to God’s request, set out to go to the land of Moriah where he would offer his son as a burnt offering. Abraham took his son, two of his servants, a donkey, and the wood for the offering and traveled to Mount Moriah.

On the way to the mountain where the sacrifice would take place, Isaac asked his father: “The fire and the wood are here, but where is the lamb for a burnt offering?” (Genesis 22:7). Abraham, probably moved by his son’s question, probably agonizing over what he was about to do, responded to his son’s question with words that showed his faith and trust in God. Abraham said: “God himself will provide the lamb for a burnt offering, my son” (Genesis 22:8).

When Abraham arrived at the place where the sacrifice would take place, he built an altar, arranged the wood on top of the altar, tied up his son, and placed him on top of the wood. As Abraham took the knife and prepared to sacrifice his son, the Angel of the LORD appeared to him and told him not to sacrifice Isaac. Then, “Abraham looked up and saw a ram, caught in a thicket by its horns. Abraham went and took the ram and offered it up as a burnt offering instead of his son” (Genesis 22:13).

A few days ago, a good friend of mine asked me if there was any significance on the shift from a lamb in verses 7 and 8 to a ram in verse 13. An explanation for this shift is found in how animals were used in the sacrificial system of ancient Israel.

The Hebrew word that both Abraham and Isaac used for the animal to be sacrificed was the śeh, a word that refers to a small animal in the herd. The word śeh is generally translated “small cattle” and it refers to the young of the sheep (a lamb) or the young of the goats (a kid). In the book of Leviticus, the śeh, the small livestock, was a clean animal and suitable for sacrifice. The śeh was customarily used when the worshiper desired to offer an animal sacrifice.

The regulations for the celebration of the Passover in Exodus 12 helps to clarify the meaning of the word. In preparation for the celebration of the Passover, Moses told the people to take a lamb for each family. Then he said: “Your lamb (Hebrew śeh) shall be without blemish, a year-old male; you may take it from the sheep or from the goats” (Exodus 12:5). Thus, the animal that Abraham mentioned, the śeh was a young lamb.

On the other hand, the ram, Hebrew ´ayil, was often one of the animals used in the sacrificial system of Israel. Rams were sacrificed as burnt-offerings, as thank-offerings, and as trespass-offerings. When rams were offered as sacrifice, they were considered of higher value than sheep and lambs (Micah 6:7).

So, instead of providing a young lamb, a śeh, God provided a full-grown ram, an ´ayil, for the sacrifice. Thus, one can say that God provided much more than Abraham expected God would provide.