Posted on October 9, 2014 by Claude Mariottini 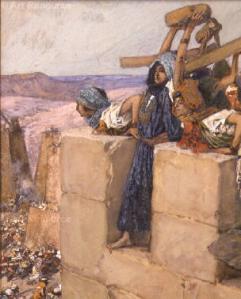 Image: The Death of Abimelech

Abimelech was a son of Gideon, the judge, by one of his concubines. Abimelech’s mother was from Shechem. The text seems to indicate that her family was very influential in the city (Judges 9:1-2). After the death of Gideon, Abimelech persuaded the elders of Shechem to anoint him king.

Although Gideon had refused that honor, Abimelech was so eager to gain the control of Israel that he went to Ophrah, to his father’s home, and murdered all his seventy brothers. Only Jotham, the youngest son of Gideon, escaped by hiding himself in a safe place. A large number of people followed Abimelech, but his rules was very short: “Abimelech ruled over Israel three years” (Judges 9:22).

To punish the leaders of Shechem, Abimelech attacked the people of Shechem as they were working in the fields. He also attacked and captured the city and killed all the people in it. He destroyed the walls of the city and scattered salt all over the land in order to make the land desolate.

After Abimelech conquered Shechem, the leaders of the city fled for safety. The writer of Judges gives a description of the events that led to Abimelech’s defeat:

All the citizens of Shechem’s Tower heard about it and went into the basement of the temple of El Berith. When Abimelech was told that they had gathered there, he and all his men went to Mount Zalmon. Abimelech took an ax, cut some brushwood, and carried it on his shoulder. He told his men, “Hurry and do what you’ve seen me do!” So all his troops also cut brushwood and followed Abimelech. They piled the brushwood on top of the basement and set it on fire with the people inside. So all the people in Shechem’s Tower died too. There were about a thousand men and women.

Then Abimelech went to Thebez, camped there, and captured it. Now, there was a strong tower inside the town. All the men, women, and leaders of the town fled to it. They locked the door behind them and went up on the roof of the tower. Abimelech came to the tower. He began to fight against it and went near the entrance of the tower to burn it down. Then a woman threw a small millstone that hit Abimelech on the head and cracked his skull (Judges 9:46-53).

When the millstone fell on the head of Abimelech, the stone cracked his skull. Abimelech knew that he was dying and as an act of desperation he called his armorbearer and asked him to hasten his death. The reason Abimelech wanted to die was because as a warrior, he did not want to be killed by a woman.

Abimelech told his armorbearer: “Take your sword and kill me! I don’t want anyone to say, ‘A woman killed Abimelech.’ It is not known how Abimelech knew that it was a woman who threw the stone from the tower. It is possible that he guessed correctly because the task of grinding grain was the task of women (Isaiah 47:2).

Abimelech’s armorbearer did as his master had asked. He delivered the final blow and Abimelech died by the hand of his attendant (Judges 9:54).

After the millstone fell on his head, Abimelech realized that he was mortally wounded. What makes Abimelech’s suicide so unique is his great ego as a man and as a warrior. As a man and as a soldier his ego would not allow him to die at the hands of a woman.

The story of Sisera and Jael is another case where a great Canaanite warrior was killed by a woman. Abimelech was killed by an unknown woman while Sisera was killed by the woman in whose tent he had sought refuge.

The irony of Abimelech’s death is that he was killed by a single stone. His death recalls the way he killed his seventy brothers on a single stone (Judges 9:5, 18).

While Saul’s servant refused to kill his master, the servant of Abimelech had no qualms about killing his master. It is quite possible that after this event, he went home and resumed his normal life.

Although what he did was tragic, the writer of the book of Judges does not write anything about the morality of this assisted suicide. Abimelech is not condemned for taking his life and the armorbearer is not criticized for carrying out the killing of his master.

Abimelech is remembered later not because he committed suicide, but because he was killed by a woman: “Who killed Abimelech son of Jerubbaal [Gideon]? Did not a woman throw an upper millstone on him from the wall, so that he died at Thebez?” (2 Samuel 11:21).

In conclusion, the writer of the book of Judges is neutral on Abimelech’s suicide. Although Abimelech was an evil man who committed abominable atrocities, the writer never attributes his death to his evil ways.

Studies on Suicide in the Bible