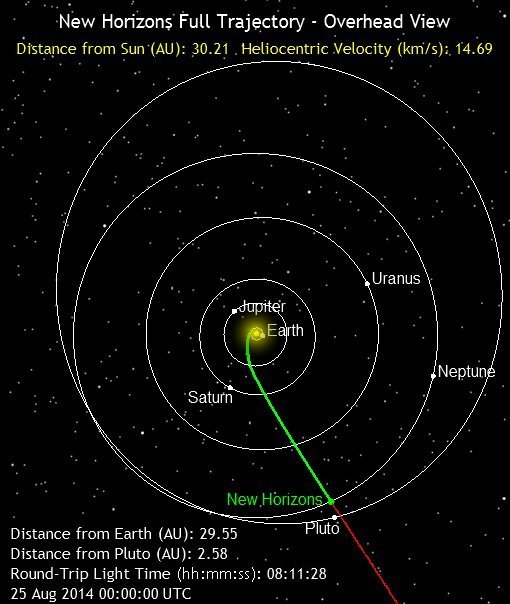 Once New Horizons crosses the orbit of Neptune, the spacecraft will enter Pluto territory and will have its closest approach to Pluto on July 14, 2015.

The story of New Horizons is an amazing feat of planetary exploration. New Horizons was launched on January 19, 2006 on a journey of more than nine years to visit the farthest planet of the solar system.

Pluto was discovered on February 18, 1930 by Clyde Tombaugh and it was classified as the ninth planet from the Sun. However, with the discovery of the Kuiper Belt and many dwarf planets orbiting beyond Neptune, Pluto was reclassified as a dwarf planet.

I am not a planetary scientist, but when Pluto was demoted to a dwarf planet, I wrote a post in which I disagreed with the decision, and surprisingly, I discovered that many people agreed with me.

Pluto is almost a mini-solar system by itself. Pluto has five moons: Nyx, Hydra, Styx, Charon, and Kerberos. Three of the five moons were discovered recently by the Hubble Telescope.

After New Horizons passes by Pluto in July 2015, it will continue studying the planet for about one month. After the survey of Pluto is concluded in August 2015, NASA is planning to use the spacecraft to study other objects in the Kuiper Belt. According to a NASA press release,

Assuming a suitable target is found at the completion of the survey and some follow-up observations later in the year, if NASA approves, the New Horizon’s trajectory can be modified in the fall of 2015 to rendezvous with a Kuiper belt object (KBO) three to four years later.

The Kuiper belt is a debris field of icy bodies left over from the solar system’s formation 4.6 billion years ago. Though the belt was hypothesized in a 1951 science paper by astronomer Gerard Kuiper, no Kuiper belt objects were found until the early 1990s. So far over 1,000 KBOs have been cataloged, though it’s hypothesized many more KBOs exist.

It would be nice if New Horizon could confirm the existence of planet X, the existence of which was first proposed by Percival Lowell at the beginning of the 20th century. Today most astronomers agree that Planet X does not exist. However, there is no doubt that New Horizons’ discoveries will revolutionize our knowledge of what is in the outer Solar System and in the Kuiper Belt.

In the movie “Star Trek: The Motion Picture” (1979), Admiral James T. Kirk, Mr. Spock, and the crew of the USS Enterprise in the year 2273 found Voyager 6, a probe sent by NASA, which was returning to Earth in search of its creator. Voyager 6 never existed. Voyager 6 was created to become an integral part of the plot of the movie. NASA, however, launched two Voyager spacecrafts. In 1977 NASA launched Voyager 1 and Voyager 2 to explore the solar system.

Although Voyager 6 never existed, New Horizons is a real spacecraft that will explore the universe beyond the solar system for years to come. I just hope that when Captain Jean-Luc Picard, Commander William Riker, Data, and the crew of the USS Enterprise find New Horizons, they will appreciate the work of NASA and the scientific community and their effort to explore the cosmos and reach beyond the stars.

I can’t wait for the close encounter on July 14, 2015. I just wish I could be there with the members of the astronomical community when the first pictures of Pluto arrive.

Watch a video about New Horizons.

This entry was posted in NASA, News and tagged NASA, New Horizons, Pluto. Bookmark the permalink.