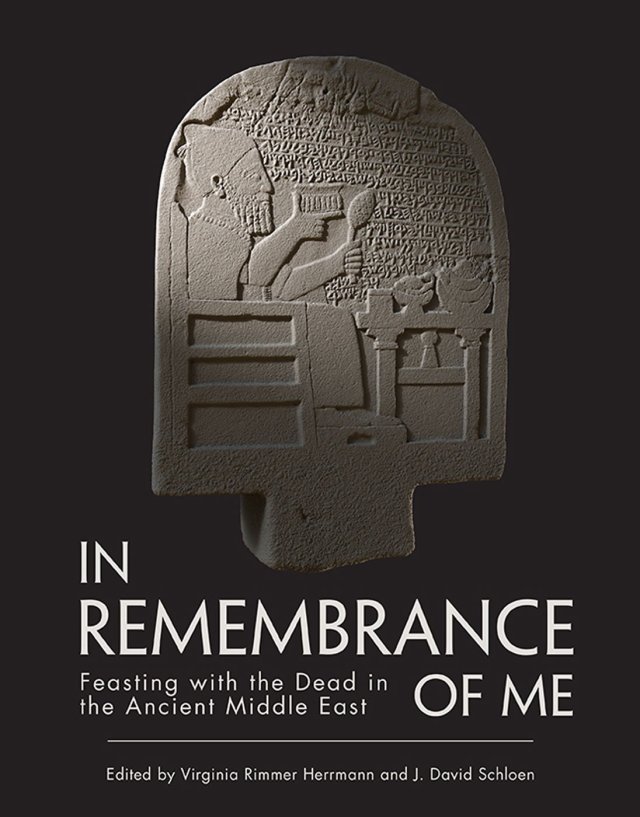 Virginia Rimmer Herrmann and J. David Schloen, eds., In Remembrance of Me: Feasting with the Dead in the Ancient Middle East. Chicago: The Oriental Institute of the University of Chicago, 2014.

The focus of the exhibit is the memorial monument (stele) of an official named Katumuwa (ca. 735 BC), discovered in 2008 by University of Chicago archaeologists at the site of Zincirli, Turkey.

The Oriental Institute has prepared a book to illustrate and explain the artifacts that are part of the exhibit. Below is a summary of the content of the book:

Part I of the catalog presents the most comprehensive collection of scholarship yet published on the interpretation of the Katumuwa Stele, an illuminating new document of ancestor cult and beliefs about the soul.

In Part II, leading scholars describe the relationship between the living and the dead in Mesopotamia, Egypt, Anatolia, and the Levant (Syria-Palestine), providing a valuable introduction to the family and mortuary religion of the ancient Middle East.

The fifty-seven objects cataloged highlight the role of food and drink offerings and stone effigies in maintaining a place for the dead in family life.

In the city of Sam’al, 2,700 years ago, a man named Katumuwa contemplated his own mortality and took steps to keep his memory alive. He knew the realm of the dead could be a cruel and lonely place, but he had hopes of a blessed afterlife in the company of the gods. But for this happy fate, the essential thing was not to be forgotten by the living, especially your own family. Katumuwa was a man of means and connections, so he commissioned a stone monument bearing not only his likeness and his name, but specific instructions for annual sacrifices for his soul and an image of himself enjoying the feast, and he set it up in a special building next door to the temple of his god. This monument, or stele, would be not only a carrier of his memory, but also an enduring home for his soul among the living, and the annual feast would be a point of connection with his descendants.

Katumuwa’s plan for remembrance was successful for several generations after his death, but in time things changed, and his city was abandoned, its people leaving his heavy memorial behind. The walls caved in and covered up it, and the stele sat in darkness and oblivion for millennia. It was just by chance that in 2008 the Oriental Institute’s expedition to Zincirli, Turkey, brought Katumuwa’s stele to light again, but because he took care to inscribe his memorial in stone, his name is restored to the tongues of the living.

Katumuwa’s rediscovery is the inspiration for this exhibit. A considerable part of both the show and the accompanying catalog are devoted to an examination of this individual’s life, death. and afterlife and the insights his memorial provides into beliefs about death and practices of remembrance in the Syro-Hittite realm of the eighth century BC. The Katumuwa Stele does not stand in isolation, however, but rather is part of a web of ideas, traditions, objects, and images that spans the Middle East and Egypt and extends through millennia. Other sections of the exhibit and catalog follow two particular threads that connect the Katumuwa Stele to practices of commemoration and care for the dead common across Egypt, the Levant, Anatolia, and Mesopotamia. First, despite great variability in burial. and mortuary practices and beliefs about the afterlife and the status of the dead, archaeological, textual, and iconographic evidence point to a widespread tradition of sharing food and drink with the ancestral dead at regular intervals, as described by the Katumuwa Stele’s inscription and depicted in its relief. Second, Katumuwa’s inscription makes explicit how his “soul’ would be present in the stone stele to receive these offerings (in fact, this is the first mention in a West Semitic context of the concept of a soul that was separable from the body). This practice of representing the dead in their interactions with the world of the living through a material effigy or likeness, usually in stone, is common in other times and places as well.

You can download a free PDF copy of In Remembrance of Me by clicking here.

The video below is a re-creation of a ceremony held in remembrance of Katumuwa. It is a great video and it is worth watching it.

This entry was posted in Archaeology and tagged Archaeology, Katumuwa, Mourning Ritual. Bookmark the permalink.