Posted on November 25, 2013 by Claude Mariottini 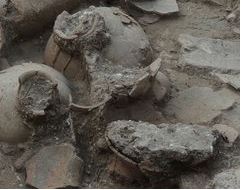 Archaeologists digging in the ruins of Tel Kabri have discovered a wine cellar where the ancient Canaanite inhabitants of the city stored about 3,000 bottles of wine.

Tel Kabri is a site near the city of Nahariya.  According to an article in the Wikipedia, Tel Kabri “contains the remains of a Canaanite city from the Middle Bronze Age (2000-1550 B.C.). It was the most important of the cities in the Western Galilee during that period and had a palace at its center. Tel Kabri is the only Canaanite city that can be excavated in its entirety because no other city was built over its remains. The palace, which occupies 1 to 1.5 acres (6,100 m2), is also the only Canaanite palace of this period that can be excavated fully. The city’s preservation offers a complete picture of political and social life in the Canaanite period, answered questions about whether or not it had a central government, whether taxes were levied and the type of agriculture practiced there.”

Below are excerpts of an article published in The New York Times which announced the discovery:

Archaeologists who have been exploring the Canaanite site, known as Tel Kabri, announced on Friday that they had found one of civilization’s oldest and largest wine cellars. The storage room held the equivalent of about 3,000 bottles of red and white wines, they said — and they suspected that this was not the palace’s only wine cellar.

The archaeologists said that much of the palace, including the banquet hall and the wine storage room, was destroyed 3,600 years ago in some violent event, perhaps an earthquake. The wine cellar was covered with thick debris of mud bricks and plaster. That and the fact that no subsequent buildings were erected on top of the site have made Tel Kabri an inviting place for archaeological studies.

In the Middle Bronze Age, from 2000 to 1550 B.C., Canaan was a confederation of city-states, the most important of which seems to have been Hazor, in a region that included what today is Israel, Lebanon, northwestern Jordan and parts of western Syria. At the time, Canaanites were farmers, merchants and early seafarers to Cyprus and the Aegean Islands. These were the centuries preceding the appearance of the biblical Hebrews. In the biblical narrative, God promised Canaan as a gift to Abraham; some modern scholars have stirred controversy suggesting that the early Israelites were in fact themselves Canaanites.

This excavation probably will produce more discoveries that will provide additional  information about the people who lived in Canaan in the Middle Bronze Age.

According to the report, archaeologists found two doors leading out of the wine cellar. Unfortunately, the discovery of the two doors came at the end of the summer’s work. Archaeologists will have to wait until 2015 to discover whether the doors leading to other rooms contain other items that will shed light on the inhabitants of Tel Kabri.

This entry was posted in Archaeology and tagged Archaeology, Tel Kabri, Wine Cellar. Bookmark the permalink.