Posted on November 2, 2009 by Claude Mariottini 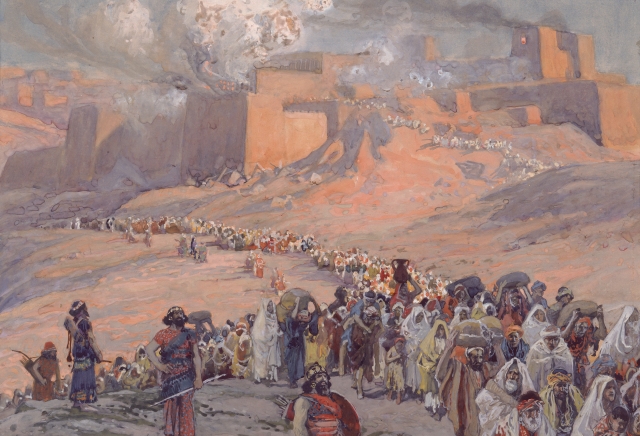 The fall of Jerusalem, the destruction of the temple, and the deportation of the people of Judah to exile in Babylon did not come suddenly, without a warning. Prophets like Jeremiah, Ezekiel and others had been warning the people of Judah that unless they repented and turned to God, the curses of the covenant would be invoked upon the nation and the people would be removed from the land which they had received as their inheritance.

The exile of Judah began when Nebuchadnezzar and his army arrived in Jerusalem. In 598 B.C. Babylon advanced against Judah. Egypt’s promised military help did not materialize because they were unable to circumvent the mighty Babylonian army: “And the king of Egypt did not come again out of his land, for the king of Babylon had taken all that belonged to the king of Egypt from the Brook of Egypt to the river Euphrates” (2 Kings 24:7).

Nebuchadnezzar’s army came up to Jerusalem and besieged the city. During the siege Jehoiakim, king of Judah died. Jeremiah 22:18-19 and 36:30 suggest that Jehoiakim was probably assassinated. Jehoiachin (his name appears as Jeconiah in 1 Chronicles 3:16 and Coniah in Jeremiah 22:24), the son of Jehoiakim, was installed as king of Judah at the age of 18 (2 Kings 24:8).

According to the Biblical text, Nebuchadnezzar himself came to Jerusalem while his servants were besieging the city (2 Kings 24:11). According to the Babylonian Chronicle, Nebuchadnezzar entered Jerusalem on March 16, 597 B.C. Jehoiachin, along with his mother and members of the royal family, his officers, advisors, and other government leaders surrendered to the king of Babylon.

At that time, the first deportation of Judah took place. According to 2 Kings 24:12-16, 10,000 people were taken into exile, including the royal family, their servants, and the palace officials. In addition, another 8,000 professional people were also taken to Babylon. However, according to Jeremiah 52:58, only 3023 people were taken captive in the 7th year of Nebuchadnezzar (597 B.C.).

The second deportation of Judah took place in 587 B.C. during the reign of Zedekiah, the last King of Judah. Zedekiah was a weak ruler who was unable to stand up against the anti-Babylonian forces in Judah and who was afraid of popular opinion. Probably incited by the prophets who were taken to Babylon and by the nobles who formed part of the anti-Babylonian forces in Judah, Zedekiah rebelled against Babylon.

In 588 B.C. Nebuchadnezzar invaded Judah and Jerusalem was blockaded: “In the ninth year of his [Zedekiah’s] reign, in the tenth month, on the tenth day of the month, Nebuchadnezzar king of Babylon came with all his army against Jerusalem and laid siege to it. And they built siegeworks all around it. So the city was besieged till the eleventh year of King Zedekiah” (2 Kings 25:1-2).

In 587 B.C. Jerusalem was captured and Zedekiah fled from the city, but was he captured, blinded, and deported to Babylon (2 Kings 25:5-7).

After the deportation of Zedekiah, Nebuzaradan, an army official of the Babylonian king, burned down the Temple, the royal palace, all the great houses of Jerusalem, and all the important buildings in the city. He also took into exile the people who remained in the city, including the people who had earlier deserted to the king of Babylon.

The exile of Judah brought drastic changes to the fabric of Judahite society. As a result of the exile, the history of Israel took a different turn. The political and religious structures that existed in Judah prior to the exile were no more and the lives of those who went to Babylon changed radically. Life in exile changed the people so much that they would never be quite the same again.

From a human perspective, the transformation of the political and religious life of Judah could have been considered the end of the political and religious existence of Judah. And yet, the vitality of Israel’s faith and the presence of God with his oppressed people give evidence that the history of Judah did not come to an end with the destruction of the temple and the burning of Jerusalem, nor with the murder of men, women, and children, and not even with the removal of the people from their ancestral land.

Instead, the exile can be seen as the dawn of a new beginning for Israel. Although the exile caused the end of the monarchy and the cessation of religious life in the Temple, the exile also became a time of purification, a time when Israel paid “double for all her sins” (Isaiah 40:2). But the exile was also a time when Israel would once again recognize Yahweh’s faithfulness to his people and experience the great deliverance Yahweh would again reveal to Israel.

The exile had a broad impact on the religious and social life of Israel. It was during Israel’s exile in Babylon that the nation’s vitality was supremely tested. The people of Judah were rooted out of their homeland, separated from their cultural values, dispossessed of their religious moorings, taken into captivity and yet, they were able to maintain their religious and ethnic identity.

However, the transition was not easy. At the beginning of their exile, there was a re-evaluation of the nation’s identity. The destruction of the temple and the deportation of the people forced the nation to look again at their relationship with Yahweh. There was a crisis of credibility in Israel’s God. Many people questioned Yahweh’s commitment to his people and his power to deliver the nation from the hands of Babylon.

This feeling of desperation and anguish is reflected in the words of the Psalmist:

By the waters of Babylon, there we sat down and wept, when we remembered Zion. On the willows there we hung up our lyres. For there our captors required of us songs, and our tormentors, mirth, saying, “Sing us one of the songs of Zion!” How shall we sing the LORD’s song in a foreign land? If I forget you, O Jerusalem, let my right hand forget its skill! Let my tongue stick to the roof of my mouth, if I do not remember you, if I do not set Jerusalem above my highest joy! (Psalm 137:1-6).

This psalm contains the words of an individual whose faith in God was affected by the events of the exile. With the destruction of Jerusalem, their holy city, the people of Judah were wondering about their future, whether their God had been defeated by the Babylonian god, or whether the mighty saving acts of God in the past had become irrelevant in the present.

Thus, the words of Psalm 137 is a genuine expression of what the people were thinking and feeling. These words express the confusion and despair of a people who believed that their sins had alienated them from God, so much so that some people believed that they had been summarily rejected by God.

In upcoming posts, I will continue to study the impact of the exile on the life of Israel.

2 Responses to The Babylonian Exile