Posted on September 24, 2008 by Claude Mariottini 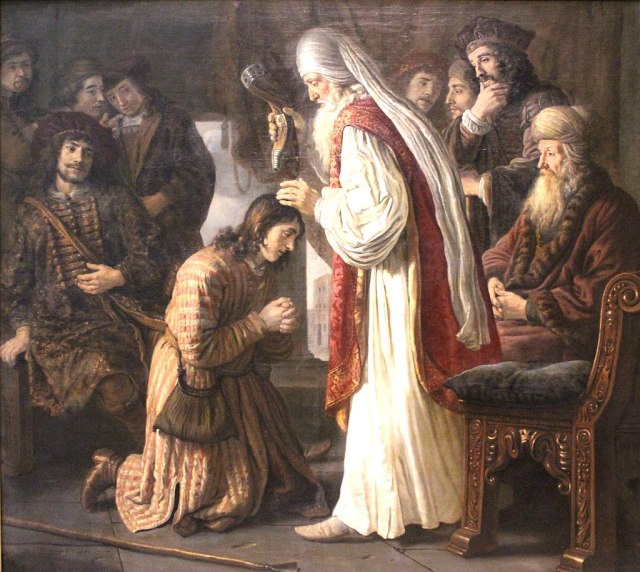 The Hebrew word “Messiah” (מָשִׁיַח) means “anointed one.” The word is derived from the verb מָשַׁח which means “to anoint.” The word occurs thirty-nine times in the Old Testament. Of these, thirty-seven times the word is translated as “anointed” and twice it is translated as “Messiah” (Daniel 9: 25-26). This latter meaning appears only in the King James Version, the New American Standard Bible, and the Holman Christian Standard Bible. Other versions, however, differ in the translation of Daniel 9:25-26. For instance, the NIV translates the word as “the Anointed One,” the RSV as “an anointed one,” and the New Jerusalem Bible as “an Anointed Prince.”

The Hebrew word messiah is also applied to the patriarchs who were regarded as prophets: “Do not touch my anointed ones; do my prophets no harm” (Psalm 105:15; cf. 1 Chronicles 16:22). In 1 Kings 19:16 Elijah is told to anoint Elisha, the son of Shaphat, a man from Abel Meholah, to succeed him as prophet. However, there is no evidence that the patriarchs or the prophets were anointed. Finally, the word messiah is used to describe Cyrus, king of Persia, as the agent YHWH used to deliver Israel from exile: “This is what the LORD says to his anointed, to Cyrus” (Isaiah 45:1).

The use of the word messiah to describe the king as “the Lord’s anointed” is due to the Israelite conception of the inviolability of the king and the belief that the king was endowed with the Spirit of YHWH (1 Samuel 24:26; 2 Samuel 1:14, 16).

The word messiah is also found in the Qumran literature. In reality, because the Messianic doctrine present in the documents found at Qumran includes many unique features that are closely related to the teachings of the early church, some scholars have suggested that John the Baptist and even Jesus himself borrowed many of their ideas from the people who lived at Qumran. However, such a suggestion has been rejected by most scholars for nowhere at Qumran, at least in the documents that have survived, is there a reference to the unique idea present in New Testament Christology: the pre-existence of the Messiah. One aspect of the eschatological view of the community at Qumran was that the community expected the coming of a Royal Messiah. This Messiah would be the head of the New Israel and the commander of the troops in the Final War against the sons of darkness.

The form “Christ” became part of the name of Jesus who in the beginning was called “Jesus the Christ” (Matthew 16:20 KJV; cf. John 20:21) and later came to be known simply as Jesus Christ. It must be noted, however, that the word “Christ” is always used by other people to refer to Jesus and not by Jesus to refer to himself. One exception is found in Matthew 16:20 where Jesus “warned his disciples not to tell anyone that he was the Christ.”

If you are unable to see the Hebrew letters in the essay, download the Biblical fonts and install them on your computer. Download the fonts here.

2 Responses to The Messiah