Mathematical Proof for the Existence of God

Posted on October 6, 2022 by Claude Mariottini

Kurt Friedrich Gödel “was a logician, mathematician, and philosopher.” Gödel is considered “to be one of the most significant logicians in history.” Gödel made important contributions to proof theory. “Proof theory is a major branch of mathematical logic that represents proofs as formal mathematical objects, facilitating their analysis by mathematical techniques.” Gödel made an attempt at using mathematics to prove the existence of God.

In an article published in Spektrum der Wissenschaft titled “Lässt sich Gott mathematisch beweisen?” and republished in the Scientific American under the title “Can God Be Proved Mathematically?,” Manon Bischoff mentions “a preprint study first posted in 2013” in which “an algorithmic proof wizard checked Gödel’s logical chain of reasoning—and found it to be undoubtedly correct.”

Gödel used logic to prove the existence of God. In the diagram below, where Ax stands for axioms, Th stands for theorems, and Df stands for definitions, Gödel proved that God exists: 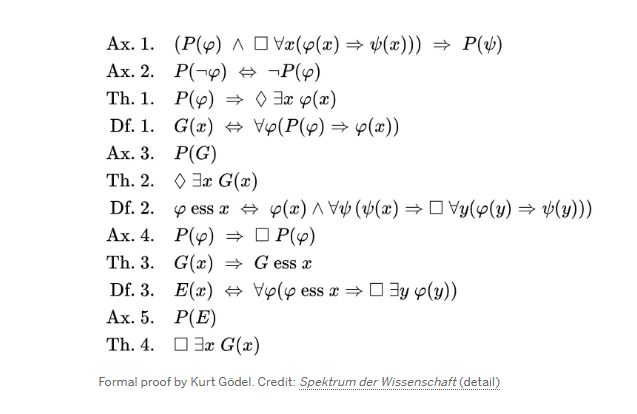 After evaluating the twelve steps in the diagram above, Bischoff concludes:

“From this one can now conclude that God exists because this being possesses every positive property, and existence is positive.”

“As it turns out, Gödel’s logical inferences are all correct—even computers have been able to prove that.”

So, according to Gödel’s logic, the existence of God can be proven mathematically.

“But all of this does not ensure that this set is unique. There could be multiple collections that satisfy the requirements. For example, as logicians have shown, it is possible to construct cases where, by Gödel’s definition, there are more than 700 divine entities that differ in essence.”

“This does not settle the final question of the existence of one (or more) divine beings. Whether mathematics is really the right way to answer this question is itself questionable—even if thinking about it is quite exciting.”

For people of faith, the God of mathematics is not the God of revelation. The God who reveals himself in the history of Israel and in the person of Christ is a God who is known by faith.

Mathematics can prove that God exists, but it cannot prove that this God is “a God merciful and gracious, slow to anger, and abounding in steadfast love and faithfulness, keeping steadfast love for the thousandth generation, forgiving iniquity and transgression and sin” (Exodus 34:6–7). Only faith can prove what kind of God God is.

2 Responses to Mathematical Proof for the Existence of God