An Introduction to the Book of Joel

Posted on October 4, 2022 by Claude Mariottini 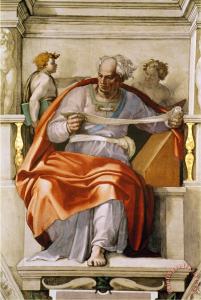 The Prophet Joel
by Michelangelo
The Sistine Chapel

The prophecy of Joel came out of his experience with the intense swarm of locust that attacked the Judean countryside. Joel detected in that profoundly disturbing event a sign of the approaching Day of Yahweh with its terrifying judgment.

Joel was the son of Pethuel. Nothing is known about his family. His name means “Yahweh is God.” The book of Joel is the second book of the Minor Prophets. The book does not give a place for Joel’s ministry; it seems that his ministry took place in Judah, primarily in Jerusalem. The precise date of his ministry is unknown and it is highly debated by scholars.

Joel ministered in Judah during a severe swarm of locust which was followed by a severe drought. Invasions of locust and droughts were common events in the ancient Near East. However, the swarm of locust and the calamitous drought that occurred in the days of Joel was so severe that the prophet saw these two events as a visitation of God upon the nation and upon the people.

Second, the devastation caused by the locust and its aftermath lasted for several years, “I will repay you for the years that the swarming locust has eaten, the hopper, the destroyer, and the cutter, my great army, which I sent against you” (Joel 2:25).

Joel mentioned what happened to the land as a result of the devastation caused by the locust. Joel said that the produce of the fields, the vineyards, and the orchards were destroyed by the locust. Joel wrote, “The fields are devastated, the ground mourns; for the grain is destroyed, the wine dries up, the oil fails. Be dismayed, you farmers, wail, you vinedressers, over the wheat and the barley; for the crops of the field are ruined. The vine withers, the fig tree droops. Pomegranate, palm, and apple – all the trees of the field are dried up” (Joel 1:10–12).

Because of the devastation caused by the locust and the calamity caused by the drought, both the people and the animals lacked food and hunger prevailed in the land. Joel said that the people were deprived of food because the storehouses were destroyed, the barns were ruined, and the grain had dried up (Joel 1:16–17).

The animals were also affected by the locust and by the drought. Joel wrote that “the animals moan with hunger! The herds of cattle wander about confused, because they have no pasture. The flocks of sheep and goats bleat in misery” (Joel 1:18 NLT).

The devastation caused by the locust and by the drought caused the suspension of the daily offering in the temple and affected the livelihood of the temple ministers who depended on the gifts of the people for their survival: “For there is no grain or wine to offer at the Temple of the LORD. So the priests are in mourning. The ministers of the LORD are weeping” (Joel 1:9 NLT).

My pastor, Jeff Griffin, the Senior Pastor of The Compass Church preached three sermons on Joel that address the hardship and the suffering the people were enduring. In his sermons, Jeff presents Joel’s unique recommendation on how to deal with hardship and calamities in life.

Joel’s instructive words and his exhortation for the people of Judah to return to God speak to the church of the twenty-first century. Jeff’s sermons on Joel will resonate with people facing hardship and suffering today. Jeff’s three sermons on Joel are as follows:

1. Joel: “The Treasure of Stories”

My three upcoming posts on Joel and his message to the people of Judah will be based on Jeff’s sermons.

OTHER STUDIES ON JOEL

Defending the Bible: The Date of Joel

Solar Eclipses in the Old Testament

This entry was posted in Book of Joel, Joel and tagged Hebrew Bible, Joel, Locust, Old Testament. Bookmark the permalink.