Posted on September 19, 2022 by Claude Mariottini 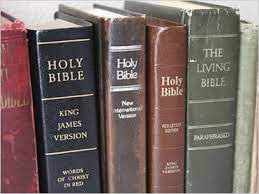 Translating the Old Testament from Hebrew and Aramaic is not easy. Whenever the translator attempts to bring the Hebrew text to an audience in the twenty-first century, the translator faces many difficult issues.

Another issue faced by translators is the problem of errors in the text. The Old Testament was copied many times by scribes who were very faithful in preserving the integrity of the manuscripts being copied. However, in making copies of manuscripts, scribes made mistakes and thus a corrupt text was passed on to the next generation.

These and many other problems are the reason there are so many translations of the Bible. Thus, the reader who does not know Hebrew must select a translation of the Bible for personal use and in doing so, the reader faces many options in selecting a Bible.

One of the major problems translators encounter in their work of producing a new translation of the Old Testament is the number of words that appear only once or twice in the Hebrew Bible. There are hundreds of words that appear only once in the Bible. These words are called hapax legomena. According to the Random House Dictionary, a hapax legomenon is a word that appears only once in a document. The word comes from the Greek and it means “something said only once.”

According to Wikipedia, “There are about 1,500 Hapax legomena in the Hebrew Bible; however, due to Hebrew roots, suffixes and prefixes, only 400 are ‘true’ hapax legomena.” In translating a word that appears only once or twice in the Old Testament, the translator must depend on the context to understand the meaning of the word. Also, translators may use words which appear in a cognate language to ascertain the meaning of the hapax legomenon.

The first example is found in Judges 4:21: “But Jael wife of Heber took a tent peg, and took a hammer in her hand, and went softly to him and drove the peg into his temple, until it wattiṣnaḥ into the ground – he was lying fast asleep from weariness – and he died.”

According to the biblical text, Jael kills Sisera, the commander of the Canaanite’s army, with a tent peg. Since the peg went through his temple into the ground, English translations translate the word wattiṣnaḥ as “went down,” “penetrated,” and “pierced through.”

The second occurrence of the word is found in Joshua 15:18 (the same passage is repeated in Judges 1:14): “When [Achsah] came to him, she urged him to ask her father for a field. As she wattiṣnaḥ from her donkey, Caleb said to her, ‘What do you wish?’”

Since Achsah, Caleb’s daughter approached her father on a donkey, English translations generally translate the word wattiṣnaḥ as “dismounted,” “alighted,” and “got off.”

Below are some examples how other translations of the Bible deal with Joshua 15:18:

“When she came to him, she urged him to ask her father for a field. As she dismounted from her donkey, Caleb said to her, ‘What do you wish?’”

“And it came to pass, as she came unto him, that she moved him to ask of her father a field: and she lighted off her ass; and Caleb said unto her, What wouldest thou?”

The Douay-Rheims translation seems to imply that Achsah was ill:

“And as they were going together, she was moved by her husband to ask a field of her father, and she sighed as she sat on her ass. And Caleb said to her: What aileth thee?”

The Greek translation of the Old Testament, the Septuagint, seems to imply that Achsah was crying:

“And it came to pass as she went out that she counselled him, saying, I will ask of my father a field; and she cried from off her ass; and Chaleb said to her, What is it?”

“When she came to him, he incited her to ask her father for a piece of land. As she sat on the ass, she broke wind, and Caleb asked her, ‘What did you mean by that?”

The translation of Joshua 15:18 was modified in the revision of the New English Bible in 1972:

“When she came to him, he incited her to ask her father for a piece of land. As she sat on the ass, she made a noise, and Caleb asked her, ‘What did you mean by that?’”

Finally, the New English Bible, recognizing that the Akkadian word did not help in understanding the meaning of the word ṣānaḥ and that their previous translations of the word did not fit the biblical context, the translators again changed their translation of Joshua 15:18 in the revision of 1992:

“When she became his wife, he induced her to ask her father for a piece of land. She dismounted from her donkey, and Caleb asked her, ‘What do you want?’”

These different translations of the Hebrew text into English or any other language clearly show that translating the Bible requires much work and diligence, primarily when the translators have to translate words that are rare, words whose meaning must be guessed or ascertained from the biblical context. And sometimes, even the context may not help translations when it comes to translate hapax legomena.

So, what did Achsah do? Did she break wind? Did she make a noise? Did she cry? Probably not. She probably dismounted her donkey in order to talk to her father.

For other studies on translating the Bible, see my post, Studies on Translation Problems in the Old Testament.