Posted on November 29, 2021 by Claude Mariottini

Oil was an indispensable commodity in the Ancient Near East for food, medicine, fuel, and ritual. Oil was considered a blessing given by God (Deuteronomy 11:14), and the olive tree was a characteristic of the land which God gave to Israel (Deuteronomy 8:8). 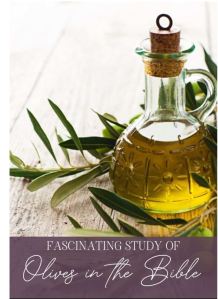 In biblical times, domestic oil was prepared from olives. Sometimes oil was combined with perfumes and used as a cosmetic (Esther 2:12). The extraction of oil from olives is abundantly confirmed by archaeological findings of stone presses found at several sites in Palestine. This oil, called “beaten oil,” was lighter and considered the best oil. After the beaten oil was extracted, another grade of oil was produced by heating the pulp and pressing it again.

Oil was extensively used in religious ceremonies. The morning and evening sacrifices required, in addition to the lambs, a tenth of a measure of fine flour and a fourth of a hin of beaten oil. Other cereal offerings also required oil.

Oil was used during the offering of purification from leprosy. In the New Testament, oil was used to anoint a body in preparation for burial (Matthew 26:12; Mark 14:8).