The Ancient Canaanite Palace at Hazor

Hazor, an important Canaanite city in Galilee, was conquered and destroyed by Joshua during the settlement of Israel in Canaan in the thirteenth century B.C.: “Joshua turned back at that time, and took Hazor, and struck its king down with the sword. Before that time Hazor was the head of all those kingdoms. And they put to the sword all who were in it, utterly destroying them; there was no one left who breathed, and he burned Hazor with fire. And all the towns of those kings, and all their kings, Joshua took, and struck them with the edge of the sword, utterly destroying them, as Moses the servant of the LORD had commanded. But Israel burned none of the towns that stood on mounds except Hazor, which Joshua did burn” (Joshua 11:10-13).

During the time of the judges, when Israel abandoned the Lord to follow the gods of the land, Jabin, the ruler of Hazor, oppressed the people of Israel: “The Israelites again did what was evil in the sight of the LORD, after Ehud died. So the LORD sold them into the hand of King Jabin of Canaan, who reigned in Hazor” (Judges 4:1-2). 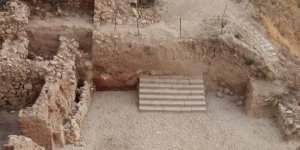 During the time of the united monarchy, Solomon fortified Hazor; “This is the account of the forced labor that King Solomon conscripted to build the house of the LORD and his own house, the Millo and the wall of Jerusalem, Hazor, Megiddo, Gezer” (1 Kings 9:15).

In the eighth century B.C., when Tiglath-pileser invaded the land of Canaan, he conquered the city of Hazor: “In the days of King Pekah of Israel, King Tiglath-pileser of Assyria came and captured Ijon, Abel-beth-maacah, Janoah, Kedesh, Hazor, Gilead, and Galilee, all the land of Naphtali; and he carried the people captive to Assyria” (2 Kings 15:29).

It is for this reason that a recent discovery of a staircase in a Canaanite palace in Hazor which was built about 3,500 years ago is so important. According to the news report published in Breaking Israel News, “The palace that was uncovered in the digs is thought to have been destroyed in the fire that nearly obliterated Hatzor, whose destruction is mentioned in the Bible.”

John Bright, in his book A History of Israel, in discussing the conquest of Hazor said, “Recent excavations have shown that Hazor, which was then the largest city in Palestine, was likewise destroyed in the latter part of the thirteenth century” (Bright 1981: 132).

Below are excerpts from the article written by Judy Siegel-Itzkovich and published in Breaking Israel News:

A magnificent, well-preserved staircase built in a Canaanite palace about 3,500 years ago has been discovered by Hebrew University of Jerusalem archeologists in the 30th season of their excavations at Tel Hatzor National Park.

The biblical Hazor was perhaps the greatest of the cities of the Land of Israel in the Late Canaanite period.

The excavations are being conducted by leading researchers from the university’s archeology institute, Israel Prize laureate Prof. Amnon Ben-Tor and Dr. Shlomit Bechar, his excavations partner in recent years. The palace that was uncovered in the digs is thought to have been destroyed in the fire that nearly obliterated Hatzor, whose destruction is mentioned in the Bible (the Book of Joshua 11:10-13) as part of the conquest of the land.

The staircase, on the northern slopes of the upper city and opposite the lower city “is unique and impressive and hints at the splendor that is expected to be exposed,” the archeologists said. Parts of the palace have been exposed in previous seasons, while the staircase has not yet been completely revealed.

The most important artifacts found in the palace include Egyptian scarabs, some 40 huge storage vessels indicating large-scale storage capacity, many basalt vessels, raw materials related to the palace workshops and four royal inscriptions (three inscriptions in Egyptian hieroglyphs and one in Akkadian).

Among these inscriptions were two Egyptian statues discovered in recent years – a sphinx fragment of the Egyptian King Mykerinos (or Menkaure, who ruled Egypt around 2,500 BCE), which was the largest Egyptian royal statue ever discovered in the Levant. The second is a fragment of a statue of an Egyptian official named Nab-Po who existed in Egypt during the Middle Kingdom during the 18th and 19th centuries BCE, a period in which Hazor did not yet exist. This is the largest private Egyptian sculpture discovered in the Levant from the second millennium BCE.

In an additional part of the dig exposed this season were found the remains of the last Jewish city that was destroyed during by Tiglath-Pileser, King of Assyria (mentioned in the book of 2 Kings 15: 29-30). A considerable quantity of shattered pottery vessels provides archeological evidence of this destruction. In future digs, the team of archeologists is expected to reveal additional parts of the city’s administrative palace.

The discovery this staircase in the Canaanite palace in Hazor is an important discovery. As Siegel-Itzkovich wrote in the conclusion of her article, “Hatzor is a key site for examining the reliability of Biblical historiography. Written documentation and various artifacts attest to the fact that the city maintained cultural and commercial ties with both Egypt and Babylon. In addition, various artistic findings brought to Hatzor from near and far are evidence of this.”

John Bright, A History of Israel. Philadelphia: The Westminster Press, 1981.

This entry was posted in Archaeology, Book of Joshua, Hazor and tagged Archaeology, Canaanite Palace, Conquest of Canaan, Hazor, Joshua. Bookmark the permalink.