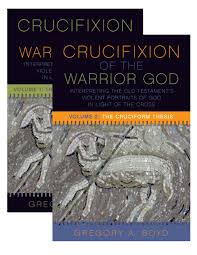 Gregory Boyd, “The Crucifixion of the Warrior God.”

This is the seventh post on the character of God based on God’s revelation of himself to Moses on Mount Sinai. The specific focus of these studies is the intergenerational punishment statement in Exodus 34:7, “yet by no means clearing the guilty, but visiting the iniquity of the parents upon the children and the children’s children, to the third and the fourth generation.” Each study in this series is based on arguments developed in previous posts. If you have not read Part 1 through Part 6 of this series, I encourage you to read them before you read the present post.

This post deals with the intergenerational punishment statement in Numbers 14 and it is divided into two parts. Part Two will be published soon. The bibliography for Part 1 and for Part 2 will appear at the end of Part 2.

Numbers 14 is an important passage for the proper understanding of how the intergenerational punishment statement worked out in most cases. In order to provide the foundation for the reasons why the enforcement of the intergenerational punishment statement happened the way it happened, four passages from both the Old and New Testaments will serve as the biblical background for the proper understanding of the enforcement of the statement.

The first passage is Jesus’ words to the Jewish leaders: “I told you that you would die in your sins, for you will die in your sins unless you believe that I am he” (John 8:24). In John 8:58, Jesus identifies himself with God. When Jesus said, “before Abraham was, I am,” he was identifying himself with the great I AM of Exodus 3:14. Thus, the words of Jesus to the Jewish leaders is that whoever does not believe in God will die in their sins.

The second passage is Paul’s declaration about humanity: “For the wages of sin is death” (Romans 6:23). The consequence of sin is death. This is the same message Ezekiel announced in the Old Testament, “The person who sins shall die” (Ezekiel 18:20). Every person who sins will die because, as the Lord said, “for the treachery of which they are guilty and the sin they have committed, they shall die” (Ezekiel 18:24).

The third passage is God’s words to Moses at the time the people of Israel made the image of the golden calf to worship. God told Moses that he was a God who “does not leave the guilty unpunished” (Exodus 34:7). God may delay his visitation upon the sinner, but he will not exonerate the guilty person from his sins.

The fourth passage is also God’s words to Moses in response to Moses’ intercession on behalf of Israel. When God forgave the people for making the golden calf, God told Moses, “Nevertheless, in the day when I visit, I will visit their sin upon them” (Exodus 32:34). Or, as the HSCB puts it, “But on the day I settle accounts, I will hold them accountable for their sin” (Exodus 32:34 HCSB). The story of the spies in Numbers 14 is a story of God’s settling accounts with the people of Israel.

Numbers 14 deals with Moses sending twelve men to survey the land of Canaan, their report to the people, and the consequences of their reluctance to enter the land. Since this story is well known, I will provide only a summary of Numbers 13-14.

According to the text, it was Yahweh himself who proposed to Moses to send spies to reconnoiter the land of Canaan (Numbers 13:1). Moses selected twelve men, one each from their ancestral tribes, each one of them was a leader in Israel. These twelve men represented all the people of Israel. These men represented the whole community, thus, when they presented a negative report to the people, they were speaking on behalf of the whole nation.

They spent forty days scouting the land. At the end of forty day, they returned to the camp and brought a report to all Israel: “they brought back word to them and to all the congregation” (Numbers 13:26). However, their report was very negative: “Yet the people who live in the land are strong, and the towns are fortified and very large; and besides, we saw the descendants of Anak there. The Amalekites live in the land of the Negeb; the Hittites, the Jebusites, and the Amorites live in the hill country; and the Canaanites live by the sea, and along the Jordan. . . . The land that we have gone through as spies is a land that devours its inhabitants; and all the people that we saw in it are of great size. There we saw the Nephilim (the Anakites come from the Nephilim); and to ourselves we seemed like grasshoppers, and so we seemed to them”
(Numbers 13:28-33).

When the people heard the words of the spies, they raised a loud cry and the people wept that night. The people complained against Moses and Aaron and “the whole congregation said to them, ‘would that we had died in the land of Egypt! Or would that we had died in this wilderness! Why is the LORD bringing us into this land to fall by the sword? Our wives and our little ones will become booty; would it not be better for us to go back to Egypt?’ So, they said to one another, ‘Let us choose a captain, and go back to Egypt’” (Numbers 14:2-5).

Joshua and Caleb were the only two spies who supported going into Canaan at that time. Faced with the rebellion of the people, Joshua told them, “do not rebel against the LORD” (Numbers 14:9), but the people threatened to stone them. Then Yahweh appeared to Moses and accused the people of rejecting him and refusing to believe in him.

Moses Intercedes on Behalf of Israel

After the people expressed their desire to return to Egypt, Yahweh said to Moses, “How long will this people despise me? And how long will they refuse to believe in me, in spite of all the signs that I have done among them?” (Numbers 14:11). The people of Israel sinned against God by despising him and by not believing that he was powerful to deliver them from the hands of their enemies.

Because of the people’s unfaithfulness, once again God threatened to destroy Israel and create a new nation with Moses and his descendants (see Exodus 32:10 and Deuteronomy 9:14). However, in this story of Israel’s rebellion and a threat of punishment, not once does the writer mention divine wrath. Instead, three times God expresses his frustration with Israel with a language of lament, “How long” (Numbers 14:11), “How long” (Numbers 14:27). These two lament questions, according to Fretheim (1984: 114), express “divine wonderment over what has happened.” Fretheim (1984: 121) explains the use of the “how long” questions by saying that they represent “a cry that contains two key elements: complaint with respect to something that is believed to have gone on long enough, and anguish over the abandonment and its seeming finality.”

In Numbers 14:11, the question is followed by an announcement of judgment in verse 12. “Yet that announcement is not irrevocable, as what follows in the dialogue between Yahweh and Moses reveals.” As Fretheim (1984: 122) puts it, “the question is a genuine question, intended to draw forth a positive response in leaders and people, so that the announced judgment may be forestalled.”

Carolyn Pressler says that the announcement of judgment was made by a spurned God who acts out of anguish. Yahweh told Moses, “I will strike them with pestilence and disinherit them, and I will make of you a nation greater and mightier than they” (Numbers 14:12). This divine threat would compromise the promise Yahweh made to Abraham that he would make “of you a great nation” (Genesis 12:2).

Yahweh consults Moses before announcing the judgment on Israel. Moses intercedes for Israel by appealing to Yahweh’s reputation. Moses tells Yahweh that the Egyptians will hear what the Lord has done to Israel and they will tell the Canaanites: “For the Egyptians will hear of it, for in your might you brought up this people from among them, and they will tell the inhabitants of this land . . . ‘It is because the LORD was not able to bring this people into the land he swore to give them that he has slaughtered them in the wilderness’” (Numbers 14:13-16). Thus, Yahweh’s failure to bring the people to Canaan shows that Yahweh does not have the power to save his people.

Moses then appeals to the merciful character of God by repeating the divine attributes revealed to him on Mount Sinai: “And now, therefore, let the power of the LORD be great in the way that you promised when you spoke, saying, ‘The LORD is slow to anger, and abounding in steadfast love, forgiving iniquity and transgression, but by no means clearing the guilty, visiting the iniquity of the parents upon the children to the third and the fourth generation.’ Forgive the iniquity of this people according to the greatness of your steadfast love, just as you have pardoned this people, from Egypt even until now” (Numbers 14:17-19).

The version of the divine attributes in Numbers 14 differs slightly from Exodus 34. The version here is somewhat abbreviated and it is presented differently from Exodus. The words “the LORD, a God merciful and gracious,” “faithfulness,” and “keeping steadfast love for the thousandth generation” in Exodus 34:6-7 were omitted in Numbers 14:18. According to Scharbert (1957: 132), these words were obviously omitted on purpose. The words of the spies and the people’s decision not to enter the land were a rejection of Yahweh, thus, these people were not among the “thousands” worthy of the promised divine grace; therefore, an appeal to Yahweh, the one “keeping steadfast love for the thousandth generation” (Exodus 34:7), is out of place here.

In response to Moses’ prayer, Yahweh told Moses, “I do forgive, just as you have asked.” The Hebrew word sālah is used in the Old Testament to refer to God’s pardoning and forgiving sinners. Yahweh told Moses that the people had tested him these ten times. The people of Israel were forbidden to put God to the test: “Do not put the LORD your God to the test (Deuteronomy 6:16) and yet, as the Lord told Moses, the people of Israel tested him ten times. Walter Kaiser said that “real atonement and forgiveness were available for all sins except those of the defiant and unrepentant sinner (Num 15:30-31) who ‘despised the word of the Lord.’”