Posted on November 17, 2018 by Claude Mariottini

According to archaeologists at the University of North Carolina at Chapel Hill, biblical mosaics discovered at the site of a synagogue in Northern Israel depict several biblical events, including Noah’s Ark, the parting of the Red Sea, Jonah and the fish, and the Tower of Babel.

The photo below shows a mosaic depicting the parting of the Red Sea. 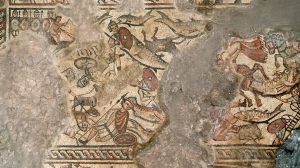 Below is an excerpt from the article published by Fox News:

For the first time, archaeologists have released detailed images of stunning biblical mosaics discovered at the site of an ancient synagogue site in Northern Israel.

The mosaics depict Noah’s Ark, the parting of the Red Sea, Jonah and the fish and the Tower of Babel, according to researchers at the University of North Carolina at Chapel Hill. Portions of the mosaics have been revealed before, but this is the first time the artifacts have been shown in their full glory.

“Although the story of Jonah was popular in early Christian art, this is the first time it has been found decorating an ancient synagogue,” Excavation Director and University of North Carolina at Chapel Hill Professor Jodi Magness told Fox News, via email. “The Huqoq version is unusual in showing three large fish swallowing Jonah, and representing the storm winds (in the upper left corner) as Harpy-Sirens – half-female, half-bird creatures from Greek mythology.”

Magness also notes that the panel depicting the Tower of Babel shows different construction activities around the tower, such as the quarrying of stone, woodworking and the use of a giant pulley. The mosaic provides important evidence for ancient building techniques, she explained.

Additionally, the panel’s depiction of the Tower’s workers is noteworthy. “The workmen have different hairstyles, clothing, and skin colors, to represent the various peoples who participated in the tower’s construction,” Magness said. “A fight is shown breaking out between two of them after God confounded their languages.”

The article contains a video introducing the mosaics and several pictures of the mosaic depicting the biblical scenes. Read the article in its entirety by visiting Fox News online.

This entry was posted in Archaeology and tagged Archaeology, Biblical Mosaics. Bookmark the permalink.