Slavery in the Roman World

Posted on December 18, 2017 by Claude Mariottini

In a previous post I introduced Scot McKnight’s commentary on Philemon and his ten arguments in which he explains why today’s church needs to read and teach the book of Philemon. His first argument was the problem of slavery, both ancient and modern. In his argument about slavery, McKnight wrote: “In our world there are millions of slaves, and this letter tells Christians in cultures where there are slaves to fight for the brothers and sisters and to establish cultures where siblingship not slavery becomes the norm.” 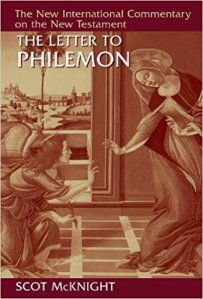 In a previous post on slavery, Slavery and the Dignity of Human Beings, I wrote:

Slavery is abhorrent because it violates the rights of men and women as individuals and because it denies them their freedom. The declaration that slavery is abhorrently wrong is based on two fundamental concepts. One, slavery is wrong because it deprives individuals of their dignity and their rights as human beings. Second, slavery degrades individuals by treating them as chattel, as property that can be bought and sold, as individuals that are considered to be less than human. Slavery deprives men and women of their freedom since the majority of slaves remain bound to their masters for an indefinite period of time, with no possibility of redemption or liberty.

McKnight strongly argues that Onesimus’ loss of dignity as a human being must be understood in the context of slavery in the Roman world, since the Roman empire classified people as either free or slaves. Philemon was a Christian and a church leader. However, as a Roman citizen, Philemon, like many Roman citizens, Christians and non-Christians, was a slave owner.

Slavery describes a perceived inferior human (the other) under the total authority of another perceived superior human, and that perceived (and false) reality is established by power and authority for the sake of profit (for the owner) and publication of the owner’s wealth. Slavery then is about voluntary exploitation of an involuntary human and in most cases slavery was for life. Slavery is about status, integrity, identity, and utility (pp. 15-16).

In Roman society, slavery was based not on race but on social location. The Romans believed that some people were born to be slaves, especially Jews and Syrians. Slaves were considered to be property that could be bought and sold. McKnight says that scholars have estimated that about 250,000 slaves were sold in Rome every year (p. 14).

In the Roman world, most slaves were prisoners of war. Many individuals were sold in the slave market by traders who kidnapped people to be sold as slaves. A few individuals sold themselves into slavery to pay debts or to improve their social condition. As a result of this exploitation of human beings, Rome became a “slave society.”

The situation of slaves in the Roman empire was precarious. Their livelihood and well-being were dependant on the will and pleasure of their owners. They were often exposed to violence and abuse. McKnight explains some of the conditions under which slaves lived:

Slaves were not only traded; they were commonly exploited and physically abused with violence. Slave bodies were branded, shackled, their hands were cut off, and their legs broken; sometimes they were castrated and iron collars imposed on them (p. 19).

Female slaves fared no better. According to McKnight,

If with males, how much more with female slaves? They were torn from families at times to become sexual property, they became available to the master of the house-as well as the sons and other males in the household, including other slaves, or they became items to sell at a profit. Part of their existence depended on their ability to satisfy the desires of the master. Some have suggested that at times slaves-male and female-used their sexuality to gain not only favor but to win manumission (p. 20).

McKnight believes that Onesimus was a runaway slave. There were many reasons slaves chose to run away from their owners. Since slaves were considered to be personal property of their masters, masters “kept slaves in their own social order by fear, punishments, disciplines, execution, and the constant threat of dissolving any kind of familial relationships. For these, and other reasons, some chose to run” (p. 21). It is possible that Onesimus left Philemon’s house because of mistreatment or fear of punishment.

McKnight contends that many interpreters misunderstand Paul’s aim with his letter to Philemon. One of the problems with the interpretation of Philemon is that some commentators look at Paul’s letter from the perspective of slavery in the USA and the ambivalent view of slavery in the Old Testament.

Second, McKnight declares that Paul is not bothered by the fact that Christians owned slaves despite his statement in Galatians 3:28 that in Christ “there is no longer slave or free.” Third, McKnight says that “there is no evidence that earliest Christianity saw any demand to manumit slaves (as any number of early fathers demonstrates)” (p. 26).

A variety of explanations have been brought to the table to explain slavery in the New Testament, not least in Paul’s own writings. Thus, Christian interpreters have said slavery was part of the order of the Roman world, that protest against slavery was impossible for someone like Paul (or most anyone else). Christians were asked to treat slaves in a Christian manner. Such treatment would, in time, effect some change in the culture of Roman slavery. Following these typical explanations has been a routine claim that Paul planted seeds for the growth of an anti-slavery and eventual abolition movement. My response is terse: if he did, Christians did not listen well and neither did Paul for he simply does not see slavery in itself as a moral problem. To extend the metaphor, if Paul was planting seeds no one watered them. Such a viewpoint of planting seeds as the beginning of a new movement admittedly accords both with modern Christian beliefs as well as with social agendas. Yet, I am entirely unconvinced this was Paul’s agenda. Paul was not unafraid to speak his mind; on this issue he did not speak his mind in favor of manumission.

If Paul’s letter was not an anti-slavery manifesto nor the beginning of an abolition movement, and if Paul was not writing to request the manumission of a Christian slave from a Christian master, what then was Paul’s agenda?

According to McKnight, Paul was not writing about the evil of slavery. He was not writing his letter to a Christian brother to request the manumission of a slave who was also a Christian brother. Rather, Paul wrote his letter to Philemon as an attempt at reconciliation, reconciliation between a runaway slave who became a believer in Christ and a slave owner who was also a believer in Christ.

In my next post I will evaluate McKnight’s commentary on Paul’s letter to Philemon and how he deals with the issue of reconciliation between a slave owner and a runaway slave.

5 Responses to Slavery in the Roman World