How the Pyramid of Giza Was Built

Posted on September 25, 2017 by Claude Mariottini

An article published in the Daily Mail is announcing that archaeologists have solved a mystery that has intrigued thousands of people over the ages, how the Great Pyramid of Giza was built.

Archaeologists have discovered a papyrus scroll that describes how the Egyptian workers moved 2½-ton blocks of limestone and granite from 500 miles away to build the tomb of Pharaoh Khufu in about 2,600 BC. According to the text found in the scroll, these huge stones were transported in wooden boats held together by ropes. The workers built channels and canals to inland port yards from the base of the pyramid. 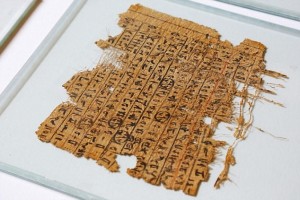 The papyrus scroll found in the seaport Wadi Al-Jarf. The scroll provides new insights into the role boats played in the construction of the pyramid.

The following is an excerpt from the article published by the Daily Mail:

Now archaeologists have discovered fascinating proof that shows how the Egyptians transported 2½-ton blocks of limestone and granite from 500 miles away to build the tomb of Pharaoh Khufu in about 2,600 BC.

At 481ft tall, it is the biggest of all the pyramids and was, until the Middle Ages, the largest man-made structure on Earth. Now the discovery of an ancient papyrus, a ceremonial boat and an ingenious system of waterworks have shed light on the infrastructure created by the builders.

The detailed archaeological material shows that thousands of skilled workers transported 170,000 tons of limestone along the Nile in wooden boats held together by ropes, through a specially constructed system of canals to an inland port just yards from the base of the pyramid.

A scroll of ancient papyrus has also been found in the seaport Wadi Al-Jarf which has given a new insight into the role boats played in the pyramid’s construction.

Written by Merer, an overseer in charge of a team of 40 elite workmen, it is the only first-hand account of the construction of the Great Pyramid, and describes in detail how limestone casing stones were shipped downstream from Tura to Giza.

In his diary, Merer also describes how his crew were involved in the transformation of the landscape, opening giant dykes to divert water from the Nile and channel it to the pyramid through man-made canals.

Although it has long been known that the granite from the pyramid’s internal chambers was quarried in Aswan, 533 miles south of Giza, and the limestone casing stones came from Tura, eight miles away, archaeologists disagreed over how they were transported.

Now archaeologist Mark Lehner, a leading expert in the field, has uncovered evidence of a lost waterway beneath the dusty Giza plateau. `We’ve outlined the central canal basin which we think was the primary delivery area to the foot of the Giza Plateau,’ he said.

You can read the article in its entirety by visiting the Daily Mail online.

If the information in the scroll proves to be accurate, then many of the episodes of Ancient Aliens will become irrelevant.