Redefining the Kingdom of God

Posted on October 8, 2014 by Claude Mariottini 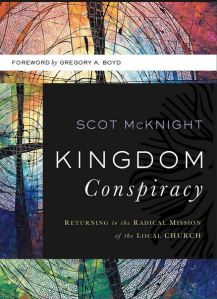 In an interview with PARSE, a newsletter published by Christianity Today, Scot McKnight discusses his new book Kingdom Conspiracy. The interview was conducted by Paul J. Pastor, the associate editor of Leadership Journal and PARSE. McKnight’s book will be released on October 21. Scot McKnight is Professor of New Testament at Northern Seminary in Lombard, Illinois.

In the interview, McKnight explains why he believes Christians today do not have a clear understanding of the concept of “the Kingdom of God.” Below is an excerpt from the interview. I have quoted this section of the interview because of McKnight’s reference to the Old Testament and Israel.

Yes and no. By adding “just” the balance is tipped toward the negative. One overhears someone groaning or rolling their eyes to say, “You can’t really mean you want to reduce kingdom to church.” Again, we get those pejorative terms at work. No, the kingdom cannot be reduced to what many think of the church, but I would say we need to expand church to kingdom proportions.

But here’s the issue: there are five elements of a kingdom in the Bible.

First, you have to have a king. That is God in Christ.

Second, the king has to rule to be a true king. A king without a rule is an empty mask.

Third, for a king to rule the king has to have something to rule. In fact, someone, and even more, some people. So, for there to be a kingdom you have to have a king who rules a people. At this point we must ask a simple question: Who is the people over whom God rules? The answer to that question in the Bible, is Israel and the church. In Christian terms we put it like this: for the kingdom to exist in the Bible we need God to rule in Christ over a people called the church. Kingdom people are church people, church people are kingdom people.

Fourth, a king rules a people by way of his will expressed in law. That is, the Torah for Israel and for the church the teachings of Jesus and life in the Spirit.

Finally, and this is an element that needs some more work but it is not a focus in my book, for there to be a kingdom there must be a king ruling over a people who dwell in a space, or a land. I believe the land promises expand in the New Testament but these five elements are now clear.

So, yes, the church now is the kingdom now.

One more important point: let’s learn to compare like to like. It does no good to compare the future kingdom—utopia, an ideal future—to the present reality of the church and then to say the church is not the kingdom. The kingdom is both a now and not yet reality and the church too is a now and not yet reality. We need to compare the present kingdom with the present church and the future kingdom with the future church. When we do that the circles are all but the same. Open your Bible and look up the word “kingdom” in the OT and ask yourself to whom/what it refers. Nearly every time it refers to Israel or a nation. We conclude that “kingdom is a people.”

You can read the entire interview with McKnight by visiting PARSE online (Click here).

2 Responses to Redefining the Kingdom of God