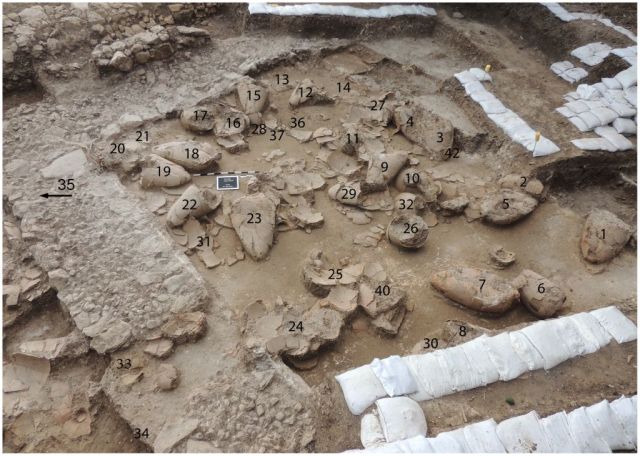 Archaeologists excavating at Tel Kabri have discovered a Canaanite royal wine cellar with a large number of vessels that held both red and white wine.

Tel Kabri, a site located in western Galilee, is the location of one of the largest Middle Bronze Age Canaanite palaces in Israel. Although Tel Kabri flourished during the Middle Bronze Age (ca. 1900-1600 B.C.) as a center of Canaanite activities, scholars do not know how Tel Kabri was known in that period.

During the 2013 excavations at Kabri, the remains of a palatial storage complex were uncovered, of which one room was excavated in its entirety. On the floor were the remains of approximately 40 restorable large, mostly handle-less, storage jars, as well as a few smaller vessels, all of which were found covered by a thick collapse of mudbricks from either the walls or the ceiling of the room (2014:1).

Archaeologists have long identified wine as an important component of Bronze Age palatial economies, including social feasting. Palatial wine storage rooms are known from documentary sources in both the Bronze Age Mediterranean and Mesopotamia, especially from the archives of the site of Mari, which are contemporary to the palace at Kabri.

A residue analysis of the jars confirmed that the Canaanites used preservatives to prevent deterioration of the wine with age. An article published in the Times of Israel describes how archaeologists evaluated the discovery of the wine cellar and the additives used in the preservation of the wine:

“The presence of both tartaric and syringic acids in relative abundance as biomarkers indicates that all of these vessels originally held wine and that we may be confident in identifying this space as a wine storage room – that is to say, a wine cellar.” A lack of syringic acid, a compound prevalent in red wine, in three of the jars may indicate the lords of the palace also held a stock of white, they postulate, “but it is difficult to say with certainty without further evidence.”

But the wine wasn’t a straight grape-to-barrel concoction. The analysis found that the ancients enhanced their vino with herbs and resins to help flavor and preserve it. Chemical traces suggest that the jar’s contents had herbal additives including “honey, storax resin, terebinth resin, cyperus, cedar oil, juniper, and perhaps even mint, myrtle, or cinnamon.”

The excavation at Tel Kabri will continue in 2015 when archaeologists hope to make additional discoveries at the site. Assaf Yasur-Landau, Chair of the Department of Maritime Civilization at the University of Haifa and one of the archaeologists involved in this project said “that there are at least two more storerooms adjoined to the one already excavated that remain to be unearthed in the 2015 season. They, too, might contain vessels for wine, or perhaps other commodities such as olive oil or wheat,”

Additional discoveries at the site may reveal more about the history of Tel Kabri and shed light on Canaanite culture and history. These new discoveries may also provide additional information about life in Canaan during the Middle Bronze Age.