The Philistine Marketplace at Ashkelon

Posted on December 19, 2013 by Claude Mariottini 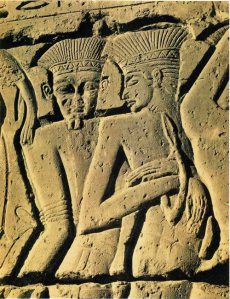 Bible History Daily, an online publication of the Biblical Archaeological Society has an interesting article on the Philistine marketplace at Ashkelon.

Ashkelon was one of the five cities in the Philistine Pentapolis. According to Judges 1:18, after the people of Israel entered the land of Canaan, the tribe of Judah captured Ashkelon and its territory, but they were unable to hold the city under its hegemony.

When Ashkelon was under the control of the Philistines, Samson went to Ashkelon and killed thirty men there in order to pay a wager he made with the Philistines during the feast celebrating his wedding with a Philistine woman.

During the celebration Samson said to the Philistines: “Let me now put a riddle to you. If you can explain it to me within the seven days of the feast, and find it out, then I will give you thirty linen garments and thirty festal garments” (Judges 14:12).

When Samson’s wife told the answer of the riddle to her fellow countrymen, Samson was obliged to pay his pledge, so “he went down to Ashkelon. He killed thirty men of the town, took their spoil, and gave the festal garments to those who had explained the riddle” (Judges 14:19).

Below is an excerpt from the article:

Perhaps at first glance, a study of ancient economics does not sound as interesting as examining ancient battles or treasure-filled tombs. Yet arguably the results of such a study are more valuable for reconstructing daily life for the average person. The seventh-century B.C.E. (Iron Age) marketplace at Philistine Ashkelon—the only archaeologically-demonstrated marketplace in the ancient Near East—provides a window into ancient economics.

Unlike other coastal cities with ports separate from the city, Ashkelon—one of the five cities of the Philistine Pentapolis mentioned in the Bible—was situated directly on the sea, with its marketplace overlooking the Mediterranean. Not surprisingly, the economy of Ashkelon was based on maritime trade. Experienced seafarers, the Philistine merchants traveled far and wide, crossing the Mediterranean world and forging economic and political ties as they went.

In 604 B.C.E., Nebuchadnezzar conquered Philistine Ashkelon, burning it to the ground. While utterly devastated, the Iron Age city was sealed in the process, and it is thanks to this act of destruction that the marketplace—and its record of ancient economics—is so well preserved. Through archaeological excavation of the Ashkelon marketplace, the bustling world of the Philistines before their demise has been revealed. Archaeologists have gained insight into many aspects of Philistine life—from their imported luxury goods to their local cooking ware to even their diet!

You can read the article in its entirety by visiting Bible History Daily online.