Posted on November 15, 2013 by Claude Mariottini 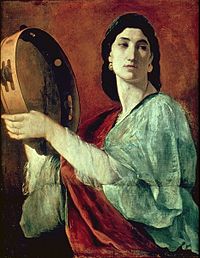 A cursory survey of the texts where the women prophets are mentioned reveals that not much information is given about their lives and ministry, in comparison with the many male prophets mentioned in the Hebrew Bible. However, the textual evidence reveals the remarkable work of these women and the legacy they left in the religious life of ancient Israel. One of these women prophets is Miriam, Moses’ sister.

Although most women are rarely mentioned in the Old Testament, Miriam’s name appears fourteen times in the Hebrew Bible, while the name of Sarah appears only once outside of the book of Genesis. Rachel appears twice outside of Genesis and the names of Ruth and Esther do not appear outside of the books that bear their names (I am not including the New Testament in these totals). Miriam’s name appears in the books of Exodus, Numbers, Deuteronomy, 1 Chronicles, and Micah. This fact alone indicates the significant impact that Miriam had in the historical memory of Israel.

Although nothing much is said about Miriam in the texts, those passages in which she appears reveal that Miriam was a very strong and vocal woman, a woman who was one of the three leaders sent by God to lead the people of Israel in their journey in the wilderness, after their exodus from Egypt. The prophet Micah reveals Miriam’s leadership role in Israel: “For I brought you up from the land of Egypt, and redeemed you from the house of bondage; and I sent before you Moses, Aaron, and Miriam” (Mic. 6:4).

The reference to Miriam in Micah 6:4 provides clear evidence of the role Miriam played in the community after Israel’s departure from Egypt. Micah calls Miriam a leader in Israel. The prophet declares that Miriam was a divinely chosen leader of the people during their sojourn in the wilderness. Micah also names Miriam in the same way he names Moses and Aaron: “I sent before you Moses, Aaron, and Miriam” (Mic. 6:4).

Miriam first appears in Exodus 2:4 as the nameless sister who watched over a basket made of bulrushes carrying the infant Moses to see what would happen to him. Miriam is first called by name at the time the Israelites celebrated their victory against Egypt at the Sea. In this song of celebration called “The Song of Miriam,” Miriam is called a prophetess. According to scholars, the Song of Miriam is one of the most ancient of poetic compositions in the Hebrew Bible.

The Song of Miriam is found in Exodus 15:20-21, where Miriam appears leading a group of women in song and dance, praising Yahweh for the victory against their enemies:

“Then the prophet Miriam, Aaron’s sister, took a tambourine in her hand; and all the women went out after her with tambourines and with dancing. And Miriam sang to them: ‘Sing to the LORD, for he has triumphed gloriously; horse and rider he has thrown into the sea’” (Exod. 15:20-21).

In this text, Miriam is called a prophet (NRSV). Most translations call her “the prophetess” (see KJV and NIV). The word “prophetess” (nebi’ah), is the feminine of the Hebrew word nabi’, “prophet.” Scholars debate whether the word “prophet” should be used to discuss Miriam’s role in the work of leading the people of Israel because there is no evidence that Miriam proclaimed oracles or that she was involved in some form of prophetic ministry as was common in the ministry of the later prophets.

The reason Miriam is called a prophet is because she led the women in the worship of God during the celebration of Israel’s victory over the Egyptians. In the Old Testament, the Levites who were associated with music in the temple were called prophets. For example, when David organized the work of the Levites in the temple, those musicians who played musical instruments were called prophets:

“David and the officers of the army also set apart for the service the sons of Asaph, and of Heman, and of Jeduthun, who should prophesy with lyres, harps, and cymbals” (1 Chron. 25:1).

The association of music and musical instruments with prophecy is found in 1 Samuel 10:5. After Samuel anointed Saul as the first king of Israel, Samuel told Saul to go to Gibeath-elohim, the place where “you will meet a band of prophets coming down from the high place with harp, tambourine, flute, and lyre before them, prophesying.”

Speaking about the Levitical involvement with temple music, Sara Japhet, in her commentary on Chronicles wrote: “Temple music as such, throughout the generations, is depicted as prophecy. Such a view would indicate that ‘prophecy’ is not ascribed to isolated, unique phenomena, but to the permanent singing establishment, which is part of the cultic framework” (1993:441).

Heman was one of the Levitical leaders selected by David to be in charge of temple music. He is called the “king’s seer” in 1 Chronicles 25:5. Heman had “fourteen sons and three daughters” and they “were all under the direction of their father for the music in the house of the LORD with cymbals, harps, and lyres for the service of the house of God” (1 Chron. 25:6). In her study of this passage, Gafney concludes that “the daughters of Heman were musical prophets as were their brothers” (2008:115).

It is clear from 1 Chronicles 25:5-6 that there were female musicians in the temple. The Old Testament mentions that women were involved in playing music instruments.

After Jephthah’s victory against the Ammonites, he returned to his home at Mizpah and his daughter came out to meet him “with timbrels and with dancing” (Judg. 11:34).

When Saul came home after defeating the Philistines, “the women came out of all the towns of Israel, singing and dancing, to meet King Saul, with tambourines, with songs of joy, and with musical instruments” (1 Sam. 18:6).

Miriam’s ministry as a prophetess was associated with her leading the women of Israel in celebration after God’s victory over the Egyptians. Although Miriam’s song of victory may not be compared to the oracles of the classical prophets, her song of deliverance was divinely inspired and it is evidence of her prophetic character.

The many references to Miriam in the Hebrew Bible show that Miriam played an important role in Israel. Her ministry as a prophet and as a leader in Israel also shows that God can call and appoint both men and women to do his work in the world.

Miriam’s life as a prophet and leader in Israel provided encouragement to the women of Israel. Miriam’s ministry as a prophet also challenges God’s people today to understand that, not withstanding discrimination against women in many societies of the past, women have much to contribute to God’s work and that they have much to teach those who are willing to listen.

Women Prophets in the Hebrew Bible

The Rabbis’ View on Huldah the Prophetess

The Nameless Prophetesses in the Book of Ezekiel

Prophecy and the Spirit of God

The Seven Prophetesses of the Old Testament

5 Responses to Miriam the Prophetess