The Remains of John the Baptist 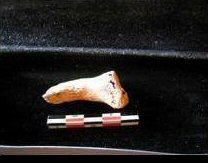 Image: Bone believed to be from John the Baptist’s body

Oxford University Researchers have done DNA tests on several bone fragments found in a monastery in Bulgaria that may be part of the remains of John the Baptist.

The human remains were found in a sarcophagus under the floor of a monastery named Sveti Ivan (St. John). According to scientists, the genes found in the bones are consistent with people who lived in the Ancient Near East.

The following is an excerpt from the report released by Oxford University:

The Bulgarian archaeologists, who excavated the bones, also found a small tuff box (made of hardened volcanic ash) close to the sarcophagus. The tuff box bears inscriptions in ancient Greek that directly mention John the Baptist and his feast day, and text asking God to ‘help your servant Thomas’. One theory is that the person referred to as Thomas had been given the task of bringing the relics to the island. An analysis of the box has shown that the tuff box has a high waterproof quality and is likely to have originated from Cappadocia, a region of modern-day Turkey. The Bulgarian researchers believe that the bones probably came to Bulgaria via Antioch, an ancient Turkish city, where the right hand of St John was kept until the tenth century.

My research suggests that during the fifth or early sixth century, the monastery of Sveti Ivan may well have received a significant portion of St John the Baptist’s relics, as well as a prestige reliquary in the shape of a sarcophagus, from a member of Constantinople’s elite. This gift could have been to dedicate or rededicate the church and the monastery to St John, which the patron or patrons may have supported financially.

Whether or not the bones belonged to John the Baptist is impossible to say. However, the reconstruction of the complete Mitochondrial DNA genome sequence confirming that the bones belonged to an individual who lived in the Ancient Near East and the radiocarbon dating placing the remains in the first century, provide the possibility of authenticity for the remains. As for my, I remain skeptic about the authenticity of the remains.

This entry was posted in Archaeology and tagged Archaeology, Georges Kazan, John the Baptist. Bookmark the permalink.

3 Responses to The Remains of John the Baptist