An Invented People: Israel or the Palestinians?

Posted on December 13, 2011 by Claude Mariottini 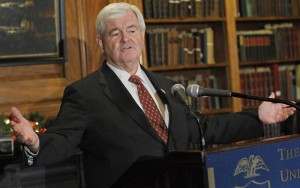 Newt Gingrich has been highly criticized for saying during an interview on a Jewish cable channel that the Palestinians “are in fact Arabs,” and that they are an “invented people.”

Gingrich said: “Remember, there was no Palestine as a state. It was part of the Ottoman Empire. We have invented the Palestinian people, who are in fact Arabs and are historically part of the Arab people, and they had the chance to go many places.”

Gingrich’s statement has been criticized by his Republican opponents and by many people in the Arab world.

Below are three different statements about the invention of a people. Read them and then decide which people are an invented people.

1. The Palestinians are an invented people.  Jonathan Tobin wrote:

There was no Palestinian Arab state or political entity under the Ottoman Empire or any previous ruler of this region. Indeed, prior to the 20th century, there is no evidence of there ever having been a consciousness on the part of the inhabitants of having a separate political identity that was distinct from the rest of the Arabs of the region.

Palestinian nationalism is, as Gingrich rightly said, a 20th century invention. It arose and flourished purely as a reaction to Zionism, a factor that has fatally complicated the quest for peace as Palestinian identity seems to be predicated more on a desire to extinguish the Jewish state and to delegitimize the Jewish presence than it is on the re-creation of an Arab political culture that is specific to this locality.

Even 50 years ago, there was little notion of a separate Palestinian political identity. After all, from 1949 to 1967 Jordan ruled the West Bank and half of Jerusalem and Egypt controlled Gaza. During those 19 years, there was no international clamor to create a Palestinian state in those territories. It would only be after Israel took control over the territories during the Six-Day War that the absence of a Palestinian state was deemed intolerable.

2. Israel is an invented people. An article that appears in the Ahlul Bayt News Agency says:

The Palestinian people have stronger claims to originality and authenticity.

In fact, Palestinians predated the Israelites by thousands of years. Remember, even Abraham, the patriarch, had to purchase a burial place for his wife Sara from a local Palestinian. The story is mentioned in the Bible.

Moreover, the Shekel, the name of the Israeli currency, was a Palestinian currency long before the advent of the Israelites. This fact, too, is corroborated by the Bible.

In truth, the Palestinians had developed a prosperous civilization long before the arrival of the quasi-barbarian Israelites who conquered the country by way of genocide and ethnic cleansing. A fleet look at the Old Testament would elucidate the facts in this regard.

For example, Keith W. Whitelam, a British scholar of impeccable credentials, wrote a meticulously researched book a few years ago on the history of Palestine . The book is entitled “the Invention of Ancient Israel, the Silencing of Palestinian History.”

The book, described by the Sunday Times of London as a “brave, fascinating and important,” shows how the ancient history of Palestine has been deliberately obscured by the search for Israel.

The author argues rather convincingly that ancient Israel has been invented by scholars in the image of European nation-states.

According to William Dalrymple, Whitelam “explores the theological and political assumptions which have shaped research into ancient Israel by Biblical scholars and contributed to the vast network of scholarship, defined by the late Palestinian scholar Edward Said as “Orientalist discourse.”

Under the subtitle of “Imaging Ancient Israel And The Politics of The East,” Whitelam argues that the picture of Israel’s past presented in much of the Hebrew Bible is a fiction, a fabrication like most pictures of the past constructed by ancient (and, we might add, modern) societies.

3. The Palestinians are an invented people. Daniel Pipes wrote:

In fact, the Palestinian identity goes back, not to antiquity, but precisely to 1920. No “Palestinian Arab people” existed at the start of 1920 but by December it took shape in a form recognizably similar to today’s.

Until the late nineteenth century, residents living in the region between the Jordan River and the Mediterranean identified themselves primarily in terms of religion: Moslems felt far stronger bonds with remote co-religionists than with nearby Christians and Jews. Living in that area did not imply any sense of common political purpose.

Then came the ideology of nationalism from Europe; its ideal of a government that embodies the spirit of its people was alien but appealing to Middle Easterners. How to apply this ideal, though? Who constitutes a nation and where must the boundaries be? These questions stimulated huge debates.

But no one suggested “Palestinians,” and for good reason. Palestine, then a secular way of saying Eretz Yisra’el or Terra Sancta, embodied a purely Jewish and Christian concept, one utterly foreign to Moslems, even repugnant to them.

This distaste was confirmed in April 1920, when the British occupying force carved out a “Palestine.” Moslems reacted very suspiciously, rightly seeing this designation as a victory for Zionism. Less accurately, they worried about it signaling a revival in the Crusader impulse. No prominent Moslem voices endorsed the delineation of Palestine in 1920; all protested it.

So, who are the invented people? Israel or the Palestinians?

7 Responses to An Invented People: Israel or the Palestinians?