Posted on September 12, 2011 by Claude Mariottini 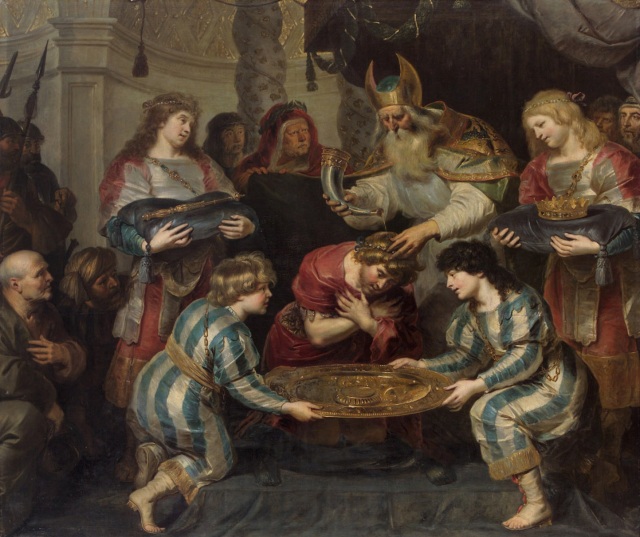 The Anointing of Solomon
by Cornelis de Vos (1651)
Wikimedia Commons

In my second post I discussed how Nathan and Bathsheba conspired to make Solomon king of Israel to succeed David.  David, unaware of the plot, declared that Solomon, not Adonijah, should be the new king after his death. In the present post, I will discuss the events that led to Adonijah’s death.

After Solomon was crowned king by David’s order, Adonijah and his supporters realized that their lives were in danger.  Adonijah’s guests were in panic because in the struggle for David’s throne, they had supported the wrong person. When the news was told that Solomon had been proclaimed king, “all of Adonijah’s guests got up trembling and went their separate ways” (1 Kings 1:49).

Adonijah’s situation was so precarious that he fled and sought asylum in the tent of the Lord by taking hold of the horns of the altar. The law of asylum in Exodus 21:12-14 was designed to protect a person who commits unintentional manslaughter.  However, Adonijah had challenged David’s authority by claiming the throne for himself. Adonijah begs for his life and asks  Solomon to make an oath that he will not be put to death.

Solomon allows Adonijah to live, provided he proves himself to be “a worthy man” (1 Kings 1:52).  This conditional oath gives Solomon a reason to kill Adonijah if he proves not to be a loyal servant of the king.

It is unknown how many years Solomon ruled as co-regent with his father David. After Solomon ascended to the throne of Israel, his father David charged him with three commissions designed to help Solomon secure his throne.

In his exhortation to Solomon, David charged Solomon to keep the commandments of God and to walk in his ways so that he could prosper as a king and be successful in ruling the people with justice.  In addition, David advised Solomon to take political action against certain individuals who could become threats against his kingship.

David told Solomon to deal with Joab because he had killed Abner and Amasa. David said:  “Act therefore according to your wisdom, but do not let his gray head go down to Sheol in peace” (1 Kings 2:6).

David told Solomon to deal with Shimei the Benjaminite, who cursed him with a terrible curse. About Shimei, David said: “Therefore do not hold him guiltless, for you are a wise man; you will know what you ought to do to him, and you must bring his gray head down with blood to Sheol” (1 Kings 2:9).

David also told Solomon to deal loyally with the sons of Barzillai the Gileadite, who helped him when he fled from Absalom. About the sons of Barzillai, David instructed Solomon: “Let them be among those who eat at your table; for with such loyalty they met me when I fled from your brother Absalom” (1 Kings 2:7).

David’s advice to Solomon may be similar to a wise king giving instructions to his successors, but the fact seems to be that David is instructing Solomon to kill the people who posed a threat to his kingdom.  Such an action would help Solomon and ensure that his kingship would be secure.

In his evaluation of David’s advice to Solomon, Marvin Sweeney, in his commentary on I & II Kings (Louisville: Westminster John Knox Press, 2007), p. 61, wrote:

“David’s testament to Solomon indicates that the dynasty was corrupt at its very foundation. It portrays a private side to David and Solomon that contrasts with the oft-stated portrayal of David’s righteousness and fidelity to YHWH and Solomon’s reputation for great wisdom.”

In my next post I will discuss in more detail the rationale for Sweeney’s negative evaluation of David and Solomon.

The Death of Adonijah

The events leading to Adonijah’s death were of his own making.  After the death of David, Adonijah made a final, subtle move that suggests that he still had ambitions to become king.

Adonijah approached Bathsheba and made a request, asking her to go to Solomon and ask him to consent to his marriage to Abishag, the Shunammite, the maiden who attended to David’s needs.  Bathsheba consented and said she would go and ask Solomon that he, Adonijah, be allowed to marry David’s concubine.

Adonijah’s request seems to be an innocent request, however, it was fraught with political implications since marrying the king’s concubine was equivalent to claiming his right to David’s throne.

Solomon understood the meaning of Adonijah’s request.  Solomon said to his mother: “How can you possibly ask me to give Abishag to Adonijah? You might as well ask me to give him the kingdom! You know that he is my older brother” (1 Kings 2:22).

Since the royal protocol was familiar to Bathsheba as the widow of the king, what was her intention in bringing Adonijah’s request to Solomon? Robert Vasholz, in his article, “The Wisdom of Bathsheba in 1 Kings 2:13-25,” Presbyterion 33  ( 2007), p. 49 wrote:

“I suggest that she fully understood what she was asking. What she did, therefore, was to give her son Solomon justification to rid himself of his chief rival, a man whom Solomon had pledged to protect.”

Bathsheba perceived that Adonijah was a serious threat to Solomon’s throne and that the threat would continue as long as Adonijah lived.  Thus, by her action, Bathsheba provided Solomon with a reason to eliminate a rival to his throne.

The mercy that Solomon had extended to Adonijah during the struggle for the throne was now withdrawn. Solomon summoned Benaiah, the commander of the mercenary army and ordered him to kill Adonijah.

Although Solomon’s actions may be judged unjustifiable, the action of Adonijah could be considered an act of treason and a violation of the oath he made to Solomon. Solomon had promised that if Adonijah proved himself “to be a worthy man, not one of his hairs shall fall to the ground; but if wickedness is found in him, he shall die” (1 King 1:52).  It was Adonijah’s violation of his oath that caused his death.

1.  The Struggle for David’s Throne

8 Responses to Solomon and Adonijah