King Saul: Little in His Own Eyes

Posted on October 3, 2005 by Claude Mariottini 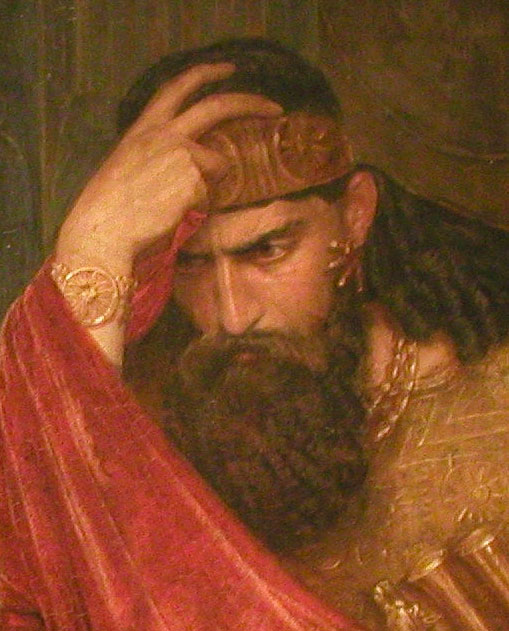 Saul was the first king of Israel.  He came to the throne at a time when the nation faced great challenges.  In a nation where people were fiercely independent, Saul was able to gain the support of the people and bring the tribes together to confront the threat posed by the Philistines.

With the ambivalent support of the prophet Samuel, Saul was placed on the throne because the prophet believed that Saul offered the best hope to unite Israel and rescue the nation from the Philistine menace.

The relationship between Samuel and Saul was rocky almost from the beginning.  Samuel represented the old order; Saul represented the new reality in Israel.  Many people in Israel were against the centralization of the government.  Samuel’s attitude toward Saul reflects the sentiment of the people who were against the idea that a human king should rule over the people of God.  The rise of the monarchy brought many changes to Israelite society and many people were unhappy with these changes.

The conflict between Samuel and Saul arose because Saul refused to obey the words of Samuel. Saul disobeyed the words of Samuel twice.  The first time was when he decided to act as a priest and offer sacrifices in order to keep the people together before a battle against the Philistines.  The second time was when Saul spared the life of Agag, king of the Amalekites.  Saul’s reason was that he was trying to please his soldiers, who were beginning to doubt his abilities as king.

Because of Saul’s disobedience, Samuel withdrew his support from Saul.  The lack of prophetical approval was devastating to Saul.  Together with the stress posed by the rise of David, that sense of rejection by Samuel practically destroyed Saul as a leader of Israel.

Saul’s problem was the same problem faced by people everywhere.  People need to find affirmation in their own heart that other people support and affirm them.  This sense of affirmation creates personal growth and helps develop strong personalities.  On the other hand, when people have the perception, real or imaginary, that they are rejected by others, they develop a sense of inferiority which can be compounded by low self-esteem.

The feeling of inferiority that affects so many people in our society comes from different sources.  Saul’s problem came because of his faulty relationship with Samuel.  Saul found himself in a situation where his abilities as a king, his attitude toward the responsibility of his office, and his obedience to God’s command were denigrated and criticized by Samuel.

Saul had worked hard to be worthy of his office and to please the people around him. He made an attempt at justifying his actions by providing his own rationale for the reasons he failed to abide by the words of Samuel, but he failed.

Saul’s need for social approval acted as a powerful motivator for his actions.  As a king, Saul believed that he needed the approval of the people and especially, the approval of Samuel.  People with low self-esteem often need the approval of other people in order to give them the required social boost they so desperately seek.

Saul’s problem was that he forgot who he was.  Samuel said to him: “Though you are little in your own eyes, are you not the head of the tribes of Israel? The LORD anointed you king over Israel” (1 Samuel 15:17).  Saul believed that he was a nobody, that nobody cared for him, and yet, he was the king of Israel and the one chosen by God to govern the people.  His feelings of inferiority destroyed his kingship.

NOTE: For other studies on Saul, read my post Saul, King of Israel.

11 Responses to King Saul: Little in His Own Eyes