The Message of Haggai

Posted on January 18, 2023 by Claude Mariottini 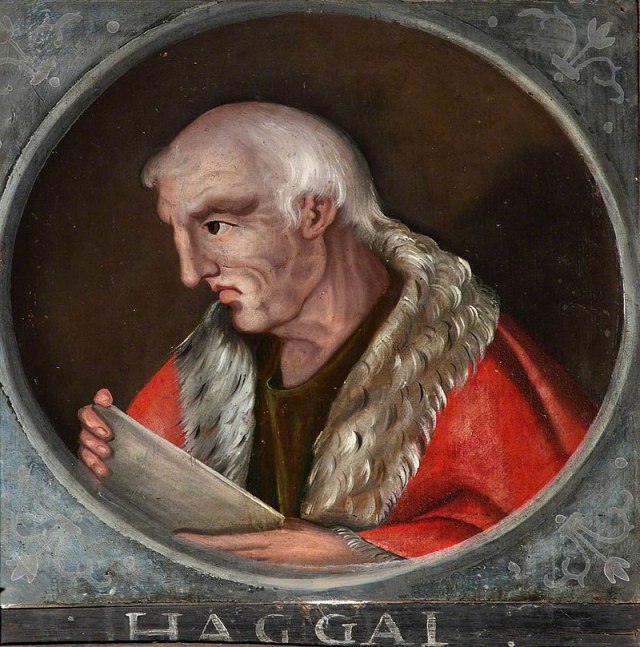 The book of Haggai contains four messages which were proclaimed in the second year of Darius I, king of Persia. These messages were preached to the people who had returned from their exile in Babylon, urging them to finish the rebuilding of the temple which was left unfinished after Sheshbazzar had laid its initial foundation. Haggai’s ministry lasted three and a half months.

Sheshbazzar had stopped rebuilding the temple because of poor economic conditions caused by a severe drought and by the opposition of the local people who had remained on the land. Haggai told the returnees that their selfish attitude was hindering the work of rebuilding the temple. Haggai’s message moved the people to change their behavior. The people listened to Haggai and made a commitment to once again rebuild the temple. The people believed that by finishing the temple, they would enjoy the end of the economic woes and usher in the restoration of the Davidic empire under the leadership of Zerubbabel, whom Haggai called “a signet ring” (Haggai 2:23).

Haggai’s first message (Haggai 1:1–15) occurred in the sixth month of the reign of Darius and was addressed to Zerubbabel, the governor, and to Joshua, the high priest, “In the second year of King Darius, in the sixth month, on the first day of the month, the word of the LORD came by the prophet Haggai to Zerubbabel son of Shealtiel, governor of Judah, and to Joshua son of Jehozadak, the high priest” (Haggai 1:1). The sixth month was the month of Elul, or August 29, 520 BCE.

Haggai’s first message was a powerful oracle which called the people to rebuild the temple. Haggai told the people that they had neglected rebuilding the temple because they were busy building their own “paneled houses” (Haggai 1:4), that is, the people had worked diligently on their own houses while they allowed the house of God to lay in ruins.

Haggai told the people that their priorities were wrong. By disregarding the work of God and the house of the Lord, the people faced hardship and were deprived of God’s blessings, “Consider how you have fared: You have sown much, and harvested little; you eat, but you never have enough; you drink, but you never have your fill; you clothe yourselves, but no one is warm; and you that earn wages earn wages to put them into a bag with holes” (Haggai 1:5–6).

Haggai challenged the people to put God first by building his house before their own. If they would put God first, they would receive God’s blessing, “Thus says the LORD of hosts: Consider how you have fared. Go up to the hills and bring wood and build the house, so that I may take pleasure in it and be honored” (Haggai 1:7–8).

Haggai told the people that because of their attitude, “the heavens above you have withheld the dew, and the earth has withheld its produce” (Haggai 1:10). The people understood that the severe hardship they had endured was because they had abandoned the house of God. As a result of Haggai’s message Zerubbabel, Joshua, and all the people “obeyed the voice of the LORD their God, and the words of the prophet Haggai” (Haggai 1:12).

The purpose of Haggai’s second message was to encourage the people to continue the work of rebuilding the temple. The people became discouraged with the building project probably because the work was slow or possibly because some of the elders remembered the former temple with all the splendor of the former temple, “Who is left among you that saw this house in its former glory? How does it look to you now? Is it not in your sight as nothing?” (Haggai 2:3).

Yahweh told the people to take courage for he was with them, “My spirit abides among you; do not fear” (Haggai 2:5). Even though the temple was not finished, Yahweh was with the people. Their effort to work on rebuilding the temple was enough to invoke his presence. The new temple may have been small and unimpressive now, but in the future it will be transformed. Yahweh will shake the heavens and the earth and the treasures of all the nations will fill the new temple with glory. Yahweh also reminded the people that the silver and gold are his, and promised that the glory of the new temple will exceed the splendor of the first temple (Haggai 2:9).

Haggai’s third message (Haggai 2:10–19) occurred on the ninth month of the second year of Darius, king of Persia: “On the twenty-fourth day of the ninth month, in the second year of Darius” (Haggai 2:10). The seventh month was the month of Chislev, or December 18, 520 BCE. Haggai’s third message came about one month after his contemporary Zechariah preached his first message (Zechariah 1:1).

Haggai’s third message comes two months after his message of encouragement. Yahweh told Haggai to ask the priests for a ruling (Haggai 2:11) about the issue of uncleanness and holiness.

The people had been building the temple, but had not reformed their lives. Yahweh wanted to stress to them that just because the temple is holy and they had been touching the materials of the temple, that did not make them holy, “every work of their hands; and what they offer there is unclean” (Haggai 2:14).

Haggai is referring the people’s neglect of rebuilding the temple in order to work in their fields. As a result, the land has not produced its fruit, “I struck you and all the products of your toil with blight and mildew and hail; yet you did not return to me, says the LORD” (Haggai 2:17).

The people had to return to the Lord. The Hebrew word translated “return” means “repent.” Repentance was the only way by which the people would experience God’s blessings.

As a result of Haggai’s exhortation, the people returned to the Lord and the work of rebuilding the temple was renewed, for on the twenty-fourth day of the ninth month, the foundation of the LORD’s temple was laid (Haggai 2:18). The day the foundations of the new temple were laid, was a day of great joy for the people, for the Lord said to them, “From this day on I will bless you” (Haggai 2:19).

Haggai’s fourth message (Haggai 2:20–23) came on the same day he proclaimed his third message, “The word of the LORD came a second time to Haggai on the twenty-fourth day of the month” (Haggai 2:20). The seventh month was the month of Chislev, or December 18, 520 BCE.

Haggai’s fourth message was a personal word to Zerubbabel. Haggai conveyed the following message from Yahweh to Zerubbabel. Yahweh told Haggai, “Speak to Zerubbabel, governor of Judah, saying, I am about to shake the heavens and the earth” (Haggai 2:21). Haggai’s words do not mean that Yahweh would physically overthrow the Persian empire in the near future.

Rather, Haggai’s words are a messianic promise for the future. In the near future, Zerubbabel will serve as a Messianic figure and become an active part in the struggle for a new age. Zerubbabel will provide a bridge between the present and the future.

Zerubbabel was a descendant of the line of David. He was the grandson of Jehoiachin, the Judean king taken into Exile by Nebuchadnezzar (1 Chronicles 3:17–19). Because Zerubbabel was granted such a position of authority by the Persian government, it proved that Yahweh was in control and that he would reestablish the Davidic line in the near future.

Deutero-Isaiah minimized the importance of the temple, “This is what the LORD says: “Heaven is my throne, and the earth is my footstool. Could you build me a temple as good as that? Could you build me such a resting place?” (Isaiah 66:1 NLT).

Jeremiah called the temple a “den of robbers” (Jeremiah 7:11). Ezekiel called the idolatry of the people in the temple “an abomination before the Lord” (Ezekiel 8:1–17). For Haggai to openly encourage the rebuilding of the temple is indeed an unusual prophetic message.

However, Haggai understood what Yahweh was trying to express to the people. The people could not grasp the concept of God being present without a dwelling place.

The temple became symbolic of God’s dwelling among his people. Yahweh was letting the people know that He desired to enter into covenant with them once again. If they would make the effort to rebuild the temple, then Yahweh would know that it was a sign that the remnant desired to enter into covenant with him again. In less than four months (August to December) Haggai completely revived the dwindling faith of the Jewish people.