The Announcement of the Birth of Jesus

Posted on December 22, 2021 by Claude Mariottini

The coming of the Messiah was an event awaited with great anticipation by the Jewish community of the first century. Many passages in the Old Testament foretold that a king from the family of David would come to deliver Israel. 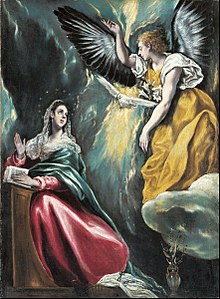 Isaiah 9:1–7 is a messianic prophecy that describes the messianic king as the Wonderful Counselor, the Mighty God, the Everlasting Father, the Prince of Peace. These descriptions of the Messiah found perfect fulfillment in Christ, for the son of Mary was both divine and human in nature.

“In the sixth month the angel Gabriel was sent by God to a town in Galilee called Nazareth, to a virgin engaged to a man whose name was Joseph, of the house of David. The virgin’s name was Mary. And he came to her and said, ‘Greetings, favored one! The Lord is with you.’ But she was much perplexed by his words and pondered what sort of greeting this might be. The angel said to her, ‘Do not be afraid, Mary, for you have found favor with God. And now, you will conceive in your womb and bear a son, and you will name him Jesus’” (Luke 1:26-31).

The announcement of the birth of the Child was in the sixth month of Elizabeth’s pregnancy (Luke 1:24, 26). Gabriel, the messenger sent from God, came to Mary who lived in the region of Galilee, probably in the village of Nazareth. The prophet Isaiah had called the region “Galilee of the gentiles” (Isaiah 9:1).

Galilee was a place despised by the Jews of Judea because of the mixed characteristics of the people who lived there. Although, according to some Jews, nothing good could come out of Galilee (John 1:46), Isaiah said that light would come out of Galilee to people who walked in darkness: “The people who walked in darkness have seen a great light; those who lived in a land of deep darkness–on them light has shined. (Isaiah 9:2).

Mary was a young woman, a virgin who was engaged to Joseph. This relationship indicates that Mary was promised to Joseph, but that marriage has not yet occurred. Joseph and Mary also were from the house of David; as such, Joseph had legal dynastic rights to the throne of David. The angel said that Mary was a favored woman, for she had become the object of God’s special grace.

Mary was chosen by God to be the instrument of God’s special revelation to people everywhere. Mary’s heart was greatly troubled because she could not understand the words of the angel. Gabriel sought to calm her fears by declaring that she had found grace in the eyes of God .

The expression, “to find grace with God” is found several times in the Old Testament. “Noah found favor in the sight of the LORD” (Genesis 6:8). Abraham asked God, “My Lord, if now I have grace in your eyes” (Genesis 18:3). To find grace in the eyes of the Lord indicates that God had bestowed his grace upon someone to accomplish a difficult task.

Mary’s task was a great task indeed. By the grace of God she was to become the mother of the Messiah. The angel declared that she would conceive and bear a son and that the child should be called Jesus, a name meaning “Savior.” These words of Gabriel are a reference to God becoming a human being and living among us. The prophet Isaiah called God the savior of Israel, “Then all flesh shall know that I am the LORD your Savior, and your Redeemer, the Mighty One of Jacob” (Isaiah 49:26).

The Humility of Mary

“He will be great, and will be called the Son of the Most High, and the Lord God will give to him the throne of his ancestor David. He will reign over the house of Jacob forever, and of his kingdom there will be no end. Mary said to the angel, ‘How can this be, since I am a virgin?’ The angel said to her, ‘The Holy Spirit will come upon you, and the power of the Most High will overshadow you; therefore the child to be born will be holy; he will be called Son of God’ (Luke 1:32-35).

These words about the kingly character of the child were references to several prophecies in the Old Testament dealing with the messianic ideal. The Old Testament affirms that the Messiah would come from the family of David to rule over the house of Israel with an everlasting kingdom. Jeremiah spoke of this new king, “the days are surely coming, says the LORD, when I will raise up for David a righteous Branch, and he shall reign as king and deal wisely, and shall execute justice and righteousness in the land” (Jeremiah 23:5).

Mary understood the words of the angel to refer to the promised Messiah, and this understanding led her to ask a question. This question does not imply doubt, as in the case of Zechariah (Luke 1:18), but it implies her need to know and understand the meaning of this revelation. Since she was not married, how were the words of the angel to be accomplished in her life?

Gabriel once again calmed her fear by declaring that her pregnancy would be the supernatural work of the Holy Spirit. This declaration of the angel was a reference to the manifestation of God to Israel (Exodus 40:34).

Thus, by this divine action, the Holy Spirit would come upon Mary and would be present in her as he was upon the Tabernacle, and Mary’s child who would be in the temple of her womb would be God himself.

The Obedience of Mary

“And now, your relative Elizabeth in her old age has also conceived a son; and this is the sixth month for her who was said to be barren. For nothing will be impossible with God. Then Mary said, ‘Here am I, the servant of the Lord; let it be with me according to your word.’ Then the angel departed from her” (Luke 1:36-38).

The angel provided Mary with a sign in order to indicate that his words were true. Elizabeth, who was her relative, was also expecting a child. She, who was old and barren, had conceived by the same power now at work in Mary’s life. Both Mary and Elizabeth had conceived because nothing is impossible with God. The same God who made the barren to conceive was the same God who would allow the virgin to conceive.

Faced with the divine will and willing to obey the divine purpose, Mary accepted this wonderful revelation, making herself available to God’s purpose. She called herself  “the handmaid of the Lord” (Luke 1:18). In a world where slaves had no choice, they had to obey the will of their masters. Mary, however, had a choice, but before such a magnificent demonstration of divine grace, Mary had no other desire than to obey God’s will.

1 Response to The Announcement of the Birth of Jesus