Posted on December 6, 2019 by Claude Mariottini

A few days ago, I saw Akhnaten, an opera in three acts presented by The Metropolitan Opera. The opera was transmitted live to a worldwide audience. The opera was written by Philip Glass and it is based on the life of Akhnaten, the pharaoh of Egypt. 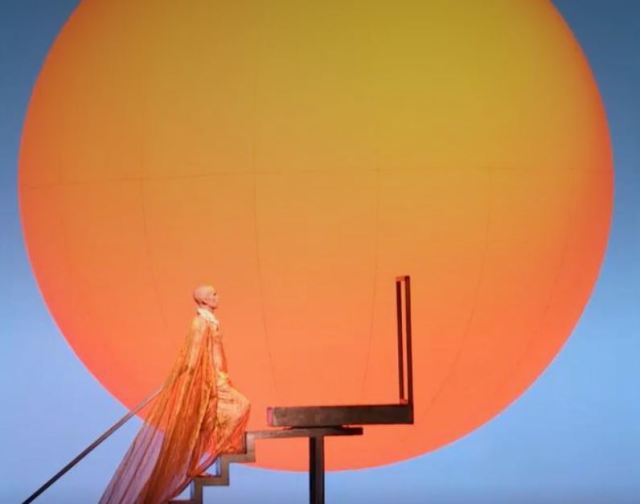 Akhnaten’s real name was Amenophis IV. He assumed the name Akhnaten when he established the cult of Aten (the Solar Disk). After Amenophis IV established the worship of Aten as the sole god, he changed his name to Akhnaten, a name which means “The Splendor of Aten.” The wife of Akhnaten was Nefertiti.

The Met’s production of Akhnaten was magnificent. The production lasted four hours and the presentation was so good that those four hours went very fast.

Below I give a summary of the three acts as distributed to the audience.

At the funeral of Amenhotep III, the pharaoh’s heart is weighed against a feather to see if he will travel into the afterlife. Amenhotep’s son steps forward, and the coronation ceremony begins. The new pharaoh rises up the stairs to make his first pronouncement. At the Window of Appearances, he reveals his intention to form a monotheistic religion. He changed his name to Akhnaten, meaning “Spirit of Aten.”

Akhnaten leads a revolt to banish the old religion and replace it with his own. He banishes the priests of Amon and forms the new order of Aten. Akhnaten and Nefertiti affirm their love to each other. The new city of Akhetaten–“the City of the Horizon of Aten”–is built in praise of the new religion. Akhnaten sings a private prayer to his god.

Akhnaten and Nefertiti dwell in an insular world of their own creation with their six daughters. Crowds gather outside the gates, and the priests of Amon break through the palace doors. Akhnaten is killed. Akhnaten’s son Tutankhamun is crowned as the new pharaoh, and the old polytheistic religion is restored.

The ghosts of Akhnaten, Nefertiti, and Queen Tye are heard from the ancient world once again.

I enjoyed Akhnaten. The Met Live in HD series is presented in cinemas throughout the USA. Even if you are not an opera lover, I encourage you to see Akhnaten.

Watch the video below, it is the trailer for the production.

This entry was posted in Egypt and tagged Akhnaten, Egypt. Bookmark the permalink.