Did God Have a Wife?

Today I want to continue my study on the gender of God. One reason some theologians are calling for the use of feminine language to address the God of the Bible is the view that ancient Israel worshiped a goddess alongside Yahweh. According to this view, the writers of the Bible suppressed the worship of God the mother in order to promote a monotheistic worship of Yahweh.

According archaeological evidence, it seems that some people in Israel believed that Yahweh had a consort by the name of Asherah. Some writers believe that there is some evidence in the Hebrew Bible that ancient Israel worshiped a goddess alongside Yahweh. In order to properly understand the gender of Yahweh, it becomes important to understand the impact of the worship of the goddess in Israelite religion.

In today’s post I want to introduce some of the goddesses that appear in the Hebrew Bible. This post on “Did God Have a Wife?” was originally posted on July 22, 2013 under the title “God and the Goddess.” The post has been renamed and revised for republication. My next post will address the masculinity of God.

In his book The Hebrew Goddess, Raphael Patai claims that after Israel entered the land of Canaan and became an agricultural society following the conquest of the land, the people of Israel began worshiping the gods of the Canaanites. The book of Judges said that after the death of Joshua, “The Israelites did what was evil in the sight of the LORD, forgetting the LORD their God, and worshiping the Baals and the Asherahs” (Judges 3:7).

Thus, as Israel began to assimilate the gods of Canaan into their worship of Yahweh, the people introduced a female deity to a religious system dominated by a God who was identified as a male God. The people of Israel found this female goddess in the Canaanite pantheon and adopted the worship of the goddess into their own system of belief and rituals. In the time of Gideon, one of the judges of Israel, altars for Baal and Asherah were erected in Israel: “The LORD said to [Gideon], ‘Take your father’s bull, the second bull seven years old, and pull down the altar of Baal which your father has, and cut down the Asherah that is beside it’” (Judges 6:25).

The goddess Asherah was unknown until 1929 when thousands of cuneiform tablets were discovered at Ugarit at a site known as Ras Shamra on the Syrian coast. In these texts Asherah appears as Athirat, and she is the consort of the supreme god, El. In his discussion of the role of Asherah in Israelite religion, John Day (1992: 1:483) writes, “Since Yahweh is equated with El in the OT, it is understandable that in syncretistic circles Yahweh also appropriated Asherah as his consort.”

The word “asherah” appears forty times in nine books of the Old Testament. The word Asherah is applied to the name of the goddess and to her cultic symbol. When the name refers to her cultic symbol, the word appears with verbs such as “to cut,” “to make.” “to set up” and “to pull or break down.” This use of the word “asherah” indicates that the asherah was being referred as a crafted wooden object.

In his book, Did God Have a Wife? Archaeology and Folk Religion in Ancient Israel, William Dever uses the results of archaeological work to study popular religion in ancient Israel. Dever believes that the elements of folk religion that we find in many texts of the Old Testament reflect the true religious practices of the average Israelite before monotheism became the religious norm in Israel.

According to Jeremiah, before the exile, the people of Israel worshiped many gods, in violation of the First Commandment. Jeremiah said: “For your gods have become as many as your towns, O Judah; and as many as the streets of Jerusalem are the altars you have set up to shame” (Jeremiah 11:13).

Dever believes that the presence of iconic representations and motifs related to the cult of Asherah found at several cultic sites, including household shrines, indicate that the worship of Asherah was primarily a woman’s cult. 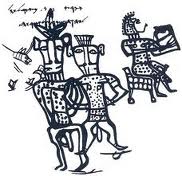 Kuntillet ‘Ajrud was an ancient caravanserai located in northern Sinai. At Kuntillet ‘Ajrud archaeologists found some important inscriptions dated to the late ninth or early eighth century B.C. in which Yahweh is mentioned in conjunction with Asherah.  The image on the left shows Yahweh, the Egyptian god Bes and Asherah playing a musical instrument. One of the inscriptions found at the site reads:

“May you be blessed by Yahweh of Shomron (Samaria) and his Asherah.”

Since the caravanserai was also a religious site, in which many religious artifacts were found, it is evident that Yahweh and Asherah were worshiped together at that place. A similar inscription was found at Khirbet el-Qom, a place located southwest of Lachish.

The inscription found at Kuntillet ‘Ajrud seems to indicate that Yahweh and Asherah appear together in a consort relationship. In his book Dever asks the question: “Did God Have a Wife?” Dever answers his own question by saying “Yes, and her name was Asherah.” The evidence discovered at Kuntillet ‘Ajrud and  Khirbet el-Qom indicate that in the eighth century B.C., many Israelites worshiped Asherah as the consort of Yahweh.

The Queen of Heaven

After the deportation of the population of Judah in 587 B.C., after Jerusalem was conquered and the temple of the Lord destroyed, a group of Judean refugees found refuge in Egypt. In Egypt, the women of Judah continued to worship the Queen of Heaven. In fact, they even blamed Jeremiah for their situation:

Many feminist theologians speak of Sophia-God. According to Gnostic tradition, Sophia was also known as the “Mother of All” and existed as the feminine aspect of God.

The Greek word “sophia” literally means “wisdom.” The Hebrew word is “hokmah,” a word also translated as “wisdom.” Because of the feminine gender of Hokmah in Hebrew and Sophia in Greek and because of the personification of wisdom in Proverbs 8, Sophia became a divine feminine apotheosis, the goddess of wisdom and a copartner with God in the work of creation. In Gnostic tradition, Sophia became the feminine personality of God.

Whether Asherah was worshiped as God’s wife, remains a matter of debate. Although folk religion accepted the worship of the Mother Goddess, it remains a fact that no Hebrew word for “goddess” appears in the Hebrew Bible, that Yahweh is never called “mother” in the Old Testament, and that he was never worshiped as a female deity.

To call God “mother” and to worship him as a female God is to return to Canaanite religion and to the pagan practices of the religions of the ancient Near East. In the Hebrew Bible God is presented as the father and husband of Israel. The Bible never refers to God as mother or wife.

To address God as a “she” or as “mother” is to return to the worldview prevalent in Canaanite religion. The prophets of the Old Testament struggled against the syncretistic tendencies of the people of Israel. To return to the practices of the folk religion of Israel is to abandon the prophetic struggle to desacralize sexuality in Israel.

1 Response to Did God Have a Wife?