Egypt, Land of the Pharaohs

Posted on January 7, 2019 by Claude Mariottini

Today I am making final preparations to go to Egypt for the first time. Since the days I took an archaeology class in seminary, it has been my dream to visit Egypt. Twice before, I was scheduled to go to Egypt, but twice I had to cancel the trip because political conditions at the time made it difficult to travel to the land of the pharaohs.

The word “Egypt” appears 681 times in the Bible. The following information about Egypt was taken from an article published in Wikipedia:

Egypt is officially called the Arab Republic of Egypt. Egypt is a country spanning the northeast corner of Africa and southwest corner of Asia by a land bridge formed by the Sinai Peninsula. Egypt is a Mediterranean country bordered by the Gaza Strip and Israel to the northeast, the Gulf of Aqaba to the east, the Red Sea to the east and south, Sudan to the south, and Libya to the west. Across the Gulf of Aqaba lies Jordan, across the Red Sea lies Saudi Arabia, and across the Mediterranean lie Greece, Turkey and Cyprus, although none share a land border with Egypt.

Egypt has one of the longest histories of any country along with India, tracing its heritage back to the 6th-4th millennia BCE. Considered a cradle of civilisation, Ancient Egypt saw some of the earliest developments of writing, agriculture, urbanisation, organised religion and central government. Iconic monuments such as the Giza Necropolis and its Great Sphinx, as well the ruins of Memphis, Thebes, Karnak, and the Valley of the Kings, reflect this legacy and remain a significant focus of scientific and popular interest. Egypt’s long and rich cultural heritage is an integral part of its national identity, which has endured, and often assimilated, various foreign influences, including Greek, Persian, Roman, Arab, Ottoman Turkish, and Nubian. Egypt was an early and important centre of Christianity, but was largely Islamised in the seventh century and remains a predominantly Muslim country, albeit with a significant Christian minority.

Egypt was called “The Land of the Pharaohs.” The following information about pharaohs was taken from an article published by the museum of the University of Pennsylvania: 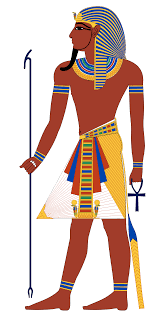 There were 170 pharaohs who ruled Egypt. Egyptologists believe that Menes was the first pharaoh of Egypt. According to Egyptian history, Menes unified Upper and Lower Egypt in a single centralized monarchy. Although the date of his rule is uncertain, most Egyptologits say that he became the rulers of the first dynasty of Egypt around 3200 BCE.

There were seven female pharaohs in Egypt. The first woman to claim the throne of Egypt was Hatshepsut. According to Egyptologists, Hatshepsut ruled Egypt for fifteen years. She was succeeded by Pharaoh Thutmosis III. Other female pharaohs include Nefertiti and Cleopatra.

Egyptian pharaohs wore ceremonial clothes. Many of the things that they wore or carried were symbols of their power and position in Egyptian society. The pharaoh wore a Nemes crown. The Nemes was a striped head cloth that covered the entire back of the head and neck. Some Egyptologists think that it was meant to look a little like a lion’s mane. Whenever a pharaoh is shown as a sphinx, the pharaoh will be wearing this crown.

The cobra on top of the Nemes crown was called a uraeus. The uraeus was an upright cobra. It meant that the pharaoh was ready to strike at his enemies with venom at any time. The uraeus was the symbol of the ancient Egyptian goddess Wadjet. Pharaohs were always portrayed with a beard. This is called a false beard. In real-life, most Egyptian men were cleanshaven, but pharaohs, even the female ones, wore fake beards. Usually the beards were plaited like a big braid. No one is really sure why the ancient Egyptian pharaohs did this, but it somehow connected the pharaoh to the gods.

Pharaohs carried a crook. The crook was a tool used by shepherds to help gather and move their flocks of sheep. The crook, a tool of shepherds, shows that the pharaoh led and protected his people.

During my trip to Egypt, I will try to post some images to show the beauty of Egypt’s history and culture.

3 Responses to Egypt, Land of the Pharaohs