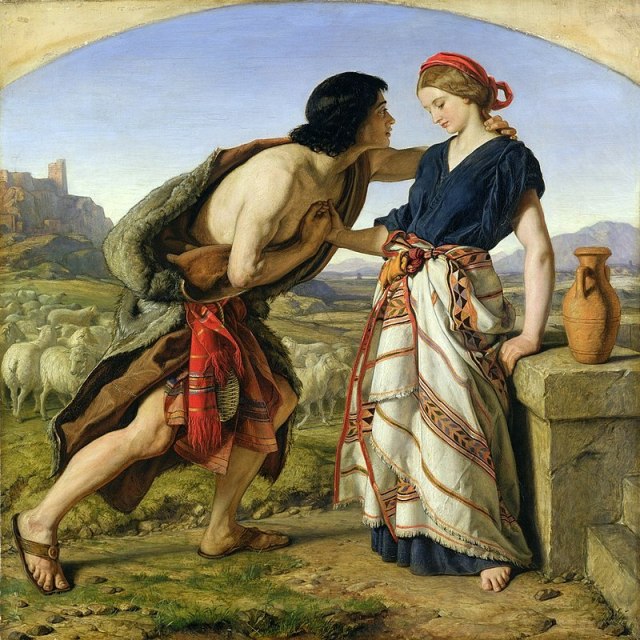 The Meeting of Jacob and Rachel
by William Dyce
Wikimedia Commons

Every year on Mother’s Day I write a post honoring the mothers of the Old Testament. As we celebrate Mother’s Day today, I want to write about a woman’s desperate desire to be a mother. That woman is Rachel, Laban’s daughter and the wife of Jacob.

Most people who read the Bible know Rachel’s story. For this reason, I will not dwell on aspects of her life. Rather, this post will deal with Rachel’s strong desire to become a mother and the struggles she faced to achieve what she wanted the most, to have sons.

Most translations of the Bible translate the Hebrew word bānîm in Genesis 30:1 as “children.” This is done in order to use inclusive language; however, the real meaning of the word is “sons.”  Leah had already given her husband four sons and no daughters. Rachel wanted sons in order to please her husband (on the issue of sons and daughters read my post Psalm 127:3: Sons or Children?). Thus, the context requires that the word bānîm be translated as “sons” and not “children.” This is the translation adopted by the Holman Christian Standard Bible: “Give me sons, or I will die!”

Rachel’s words to her husband, “Give me sons, or I shall die!” reveal the struggle Rachel faced throughout the many years she was married to Jacob. Jacob had worked seven years for Rachel. On Rachel’s wedding night, her father gave her sister Leah to Jacob as a wife rather than her. Rachel probably had not given her consent to this change; she was merely a pawn in her father’s hand, a property that was transferred from one man, her father, to another man, her husband, for a price, in this case the seven years Jacob worked for Laban.

Jacob eventually married Rachel, but he had to work another seven years for her. During these seven years Rachel struggled with her sister for Jacob’s attention and for his love. In her struggle with her sister for Jacob’s attention, Rachel had one consolation: she knew that Jacob loved her (Gen 29:20) and that he did not love Leah (Gen 29:31): “So Jacob went in to Rachel also, and he loved Rachel more than Leah” (Gen 29:30).

Rachel’s new family consisted of a husband who loved her and a sister who also desired the love of her husband. However, what characterized the relationship between the two sisters was the way they tried to please their husband: by having children. Rachel and Leah wanted to have children in order to gain the favor of their husband. The problem was that Leah was fertile while Rachel was barren.

In the culture in which Rachel lived, barrenness was seen as the greatest misfortune and humiliation a woman could face. Barren women were plagued by feelings of worthlessness and humiliation. Rachel’s story epitomizes the agony of barrenness and the conflict it brings to a family. When she was finally able to conceive and bear a son, Rachel exclaimed: “God has taken away my disgrace” (Gen 30:23 NIV).

In situations where the wife was barren, the husband could take a second wife in order to obtain a son from her or the barren wife could give a slave-girl to her husband as a secondary wife or as a concubine. The children born of this union would then be adopted as the children of the barren wife.

“When the LORD saw that Leah was unloved, he opened her womb; but Rachel was barren. (Gen 29:31). The expression “he opened her womb” may be an indication that Leah also was barren. By giving sons to Leah, the Lord was now taking the side of Leah in this struggle for Jacob’s love. Leah had already taken Rachel’s place as Jacob’s wife; by granting her children, God gave the advantage to Leah and before Rachel was able to give birth to her first son, Leah gave birth to six sons and one daughter.

Rachel was beautiful and loved, but neither beauty nor love would compensate for barrenness. Rachel wanted what Leah has, sons. She wanted to be a mother and thus fulfill her destiny as a woman and as a wife. Her plea to Jacob, “Give me sons, or I will die!” indicates that she did not want just one son; she wanted many. In her plea to Jacob, Rachel spoke about sons and death. It is ironic that, when her wish is fulfilled, Rachel died when she gave birth to her second son Benjamin (Gen 35:18).

Rachel’s plea to Jacob is a cry of desperation. Leah had already given Jacob four sons but Rachel was still barren. Jacob answered Rachel by saying that her barrenness was the work of God: “Jacob became very angry with Rachel and said, ‘Am I in the place of God, who has withheld from you the fruit of the womb?’” (Gen 30:2).

In her desperation, Rachel gave her maidservant Bilhah to Jacob. Rachel said: “Here is my maid Bilhah; go in to her, that she may bear upon my knees and that I too may have children through her” (Gen 30:3). This practice was common in the Ancient Near East. When a wife was unable to bear children, she would give a slave to her husband as a secondary wife who would bear a son for her mistress. The son of the slave girl would then be considered the son of the true wife.

Rachel had two sons through Bilhah:

“Bilhah conceived and bore Jacob a son. Then Rachel said, ‘God has judged me, and has also heard my voice and given me a son’; therefore she named him Dan. Rachel’s maid Bilhah conceived again and bore Jacob a second son. Then Rachel said, ‘With mighty wrestlings I have wrestled with my sister, and have prevailed’; so she named him Naphtali” (Gen 30:5-8).

When Bilhah gave birth to the first son, Rachel said that God had vindicated her (Gen 30:6). When Bilhah conceived a second son, Rachel said: “I have wrestled with my sister, and have prevailed” (Gen 30:8). Dan and Naphtali are Rachel’s children by adoption although they were born to Bilhah. It is Rachel who named the children and by naming them, Rachel proclaimed her victory over her sister and her vindication as a woman and wife. Although Rachel twice claimed victory over her sister, she still was barren and without a son of her own.

When Leah saw what Rachel had done and because she had ceased bearing children, Leah took her handmaid Zilpah and gave her to Jacob as a secondary wife. Zilpah gave birth to two sons, Gad and Asher.

When Rachel saw that Leah’s family was increasing, she allowed Leah to have a night with Jacob in exchange for some of the mandrakes that Reuben, Leah’s son, had found. Mandrake was a plant found in Israel. People believed that the fruit of the plant was an aphrodisiac and that it cured barrenness. When Jacob came from the field, Leah told him: “You must come in to me; for I have hired you with my son’s mandrakes” (Gen 30:16).

Once again God intervened in the struggle between the two sisters: “And God heeded Leah, and she conceived and bore Jacob a fifth son” (Gen 30:17). Leah named him Issachar. Leah conceived again and she gave Jacob a sixth son whom she named Zebulun. Then Leah gave birth to Jacob’s only daughter Dinah.

After Leah had given Jacob six sons and one daughter, God remembered Rachel and opened her womb (Gen 30:22). Rachel named her son Joseph, for she said: “May the LORD add to me another son!” (Gen 30:24). Thus, Joseph’s name is in fact Rachel’s request for more sons. A few years later Rachel conceived again but this time at the cost of her own life because she died giving birth to her second son whom she named “Ben-oni” (Gen 35:18), a name meaning “son of my misfortune.” Jacob changed his name to “Benjamin,” a name which means “son of good fortune.”

As one reads Rachel’s story and her struggle to become a mother, one can see the tragedy behind this desperate woman. Her married life was marked by her desire to become a mother. Although she was loved by her husband, Rachel suffered when she saw her sister enjoying the affection of her seven children.

Rachel did not survive to spend motherly time with her son Benjamin. Her story reflects the plight of the barren wife. Her life with Jacob begins with the great disappointment of her wedding night and it ends with the tragic hard labor of childbirth that deprived her of the love of her second son.

In his study of Rachel and Leah, Jon L. Berquist wrote: “In the end, Leah and Rachel both sold their dignity to achieve sons. Leah never purchased her husbands’s love with all her children. Rachel had love from the beginning, but wanted exclusive rights on that love; she gambled and, at the moment of her greatest achievement that might have bought her what she wanted, she lost everything” (p. 60).

4 Responses to Give Me Sons