The Jesus’ Wife Papyrus: A Hoax 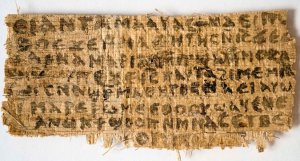 In a recent post titled “The Gospel of Jesus’ Wife,” I discussed the results of a test conducted by scientists from Harvard University and the Massachusetts Institute of Technology on the so-called “The Jesus’ Wife Papyrus” in which radiocarbon testing on the chemical composition of the papyrus led them to believe that the papyrus should be dated between 659-859 AD.

In that same post I also presented the views of Leo Depuydt, a professor of Egyptology at Brown University, who said that he had “not the slightest doubt that the document is a forgery, and not a very good one at that.”

I still stand by that statement, and recent events have proved that there was no reason to question what the New Testament says about Jesus’ marital status.

In a recent article published in The Wall Street Journal, “How the ‘Jesus’ Wife’ Hoax Fell Apart,” Jerry Pattengale, executive director of the Green Scholars Initiative, wrote that Christian Askeland, a Coptic specialist at Indiana Wesleyan University, has proven “that the ‘Gospel of Jesus’ Wife,’ as the fragment is known, was a match for a papyrus fragment that is clearly a forgery.”

In his article, Pattengale describes how Askeland came to the conclusion that “The Gospel of Jesus’ Wife” was a forgery:

Mr. Askeland found, among the online links that Harvard used as part of its publicity push, images of another fragment, of the Gospel of John, that turned out to share many similarities-including the handwriting, ink and writing instrument used-with the “wife” fragment. The Gospel of John text, he discovered, had been directly copied from a 1924 publication.

“Two factors immediately indicated that this was a forgery,” Mr. Askeland tells me. “First, the fragment shared the same line breaks as the 1924 publication. Second, the fragment contained a peculiar dialect of Coptic called Lycopolitan, which fell out of use during or before the sixth century.” Ms. King had done two radiometric tests, he noted, and “concluded that the papyrus plants used for this fragment had been harvested in the seventh to ninth centuries.” In other words, the fragment that came from the same material as the “Jesus’ wife” fragment was written in a dialect that didn’t exist when the papyrus it appears on was made.

Pattengale concludes his article with this statement: “What is harder to understand was the rush by the media and others to embrace the idea that Jesus had a wife and that Christian beliefs have been mistaken for centuries. No evidence for Jesus having been married exists in any of the thousands of orthodox biblical writings dating to antiquity.”

When outlandish claims are made about the Bible and the person of Jesus Christ, Christians must remain firm in the conviction that what the New Testament says about Jesus cannot be contradicted by documents that purportedly present a different truth from the truth taught in the gospels.

When claims are made that a new gospel contradicts the gospels, keep in mind what Paul wrote to the believers at Galatia: “I am astonished that you are so quickly deserting the one who called you in the grace of Christ and are turning to a different gospel–not that there is another gospel, but there are some who are confusing you and want to pervert the gospel of Christ” (Galatians 1:6-7).

There is no other gospel.