Tamar, the Victim of Rape 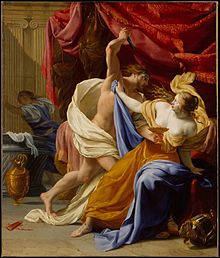 This is my fourth post on the rape of Tamar. The links for the previous posts are listed at the end of this post.

But she said to him, “No, my brother! Don’t humiliate me! This just isn’t done in Israel! Don’t do this foolish thing! How could I ever be rid of my humiliation? And you would be considered one of the fools in Israel! Just speak to the king, for he will not withhold me from you.” But he refused to listen to her. He overpowered her and humiliated her by raping her. Then Amnon greatly despised her. His disdain toward her surpassed the love he had previously felt toward her. Amnon said to her, “Get up and leave!” But she said to him, “No I won’t, for sending me away now would be worse than what you did to me earlier!” But he refused to listen to her. He called his personal attendant and said to him, “Take this woman out of my sight and lock the door behind her!’ (Now she was wearing a long robe, for this is what the king’s virgin daughters used to wear.) So Amnon’s attendant removed her and bolted the door behind her. Then Tamar put ashes on her head and tore the long robe she was wearing. She put her hands on her head and went on her way, wailing as she went (2 Samuel 13:12-19 NET).

Tamar was the daughter of David by his wife Maachah, who was a Geshurite princess. She was the full sister of Absalom and the half-sister of Amnon, the eldest son of David by Ahinoam, another of David’s many wives.

Tamar was probably named after the Tamar who became the mother of the sons of Judah (Genesis 38). Tamar, Judah’s wife is praised by the women of Bethlehem for giving children to Judah: “May your house be like the house of Perez, whom Tamar bore to Judah” (Ruth 4:12).

The story of Tamar is a tragic and sad story of a woman who was raped and repudiated by her half-brother. The Bible says that Tamar was very beautiful (2 Samuel 13:1) and her beauty stimulated a strong lust in Amnon. So strong was Amnon’s desire for Tamar that he made himself sick because he felt that it was impossible for him to have sex with her because she was a virgin.

With the help of his cousin Jonadab, Amnon devised a plan to bring Tamar to his house and then satisfy his lustful desire for her. When David came to visit him, Amnon asked his father to allow Tamar to come to his house and prepare food so that he would eat.

When Tamar was summoned by her father to go and attend her sick brother, Tamar went to minister to Amnon, unaware that her brother had other intentions. She came to his house, prepared the food he desired, and went into his bedroom with the food she has prepared for Amnon, who was in bed pretending to be sick.

What happened in the privacy of the bedroom changed Tamar’s life and created an alternative future that brought shame and devastation to this princess of Israel. When Tamar handed the food to Amnon, he grabbed her hand and asked her to come to bed with him.

Tamar tried to reason with Amnon by asking him not to rape her “for such a thing is not done in Israel; do not do anything so vile” (2 Samuel 13:12 NRSV). By forcing her to have sex against her will, Amnon was violating the social norms Israelite society had established to define the relationship between a man and a woman.

Tamar’s words refer to a violation of the moral and sexual customs of Israel. The Hebrew word nebālāh is also used in Genesis 34:7 in reference to Shechem’s rape of Dinah. When the rape of Dinah was discovered, the sons of Jacob were indignant because Shechem “committed an outrage in Israel by lying with Jacob’s daughter” (Genesis 34:7). The versions use strong language to describe rape in Israel: “ an outrage” (NRSV), “a disgraceful thing” (NIV), and “a godless act” (GWN).

Passionately, Amnon has desired to see and touch her, for with these senses he has made of her what he wills. But to hear her voice is another matter; it disturbs the fantasies that eyes and hands have fashioned. To hear might mean repentance. So Amnon chooses to close out her voice, even leaving his refusal for the narrator to report. Amnon cares not at all for his sister. He acts against her will to pursue his lust (1984: 46).

So, Amnon overpowered Tamar and humiliated her by raping her. The word “overpower” literally means “to force.” The Hebrew word hāzaq means “to be strong.” When the word is used to describe the action of an individual against another, the word carries the idea of violence. Rape is the violent act of an individual against another. In this case, a violent act of a man against a woman. The use of hāzaq in the narrative implies that Tamar struggled valiantly with Amnon in her attempt to resist her attacker.

“He forced her and lay with her.” The Hebrew behind the expression “he lay with her” is much more graphic than the English translation reveals. Literally, the Hebrew says: “he lay her.” According to McCarter, the scribes here substituted the form of a Hebrew verb for another because they deemed the original form of the verb to be too obscene (1984:317).

After Amnon had satisfied his lust, he told Tamar to get out of his house. Tamar protested: “No I won’t, for sending me away now would be worse than what you did to me earlier!” Her refusal to go reflects the legal tradition of Israel. The legal tradition in Israel about rape was as follows: “If a man meets a virgin who is not engaged, and seizes her and lies with her, and they are caught in the act, the man who lay with her shall give fifty shekels of silver to the young woman’s father, and she shall become his wife. Because he violated her he shall not be permitted to divorce her [send her away] as long as he lives” (Deuteronomy 22:28-29).

Tamar knew that if Amnon sent her away after raping her, her disgrace would be greater than before because society would expect Amnon to keep his obligation and marry her.

But Amnon again refused to listen to Tamar. He called one of his servants and told him, “Take this woman out of my sight and lock the door behind her!” The English translation hides Amnon’s contempt for Tamar. The word “woman” is not in the Hebrew text. Amnon simply says: “Take this out of my sight.” What he meant to say was “Take this thing out of my sight.”

So Amnon sends Tamar away in disgrace, a disgrace that she will bear for as long as she lives. Amnon had violated her virginity. In Israelite society, a woman’s virginity was very important to her sense of worth as a woman. The trauma suffered by Tamar when Amnon violated her body caused Tamar to experience a sense of unbearable shame and deep humiliation that could not be hidden from family and friends.

The person that Amnon thought he loved had become a thing to be used and discarded. Burke Long wrote: “Tamar is twice the victim: once as the prize of brother become rapist, a second time as though a symbol of rapist turned self-hater” (1981: 28).

So, “Tamar put ashes on her head and tore the long robe she was wearing. She put her hands on her head and went on her way, wailing as she went.” These actions by Tamar reflect her despair, grief, sadness, hopelessness, and her humiliation for being violated by her brother.

Raped and rejected, Tamar finds refuge in the house of her brother Absalom, where she remained as if in a state of widowhood. “So Tamar remained, a desolate woman, in her brother Absalom’s house” (2 Samuel 13:20). In her desolate condition, Long wrote, “we watch not a beautiful young woman, but a woman become old in her desolation, wearing the shredded tokens of a bereaved widow without ever having been a wife” (1981:29).

We do not know how long Tamar lived after she was raped. After her death Absalom named his daughter Tamar in memory of his deceased sister. Tamar, Absalom’s daughter was as beautiful as her aunt (2 Samuel 14:27).

My next post will deal with Absalom and his effort to vindicate Tamar.

Studies on the Rape of Tamar

The Rape of Tamar

Tamar, the Victim of Rape