Posted on December 7, 2011 by Claude Mariottini

Archaeologists digging in the City of David have found mysterious stone carvings that were made thousands of years ago.  According to Eli Shukron, one of the archaeologists directing the dig, the “V” shape carvings were made around 800 B.C., probably at the time when one of the kings of Judah was building a defensive wall.

The following is an excerpt from the news release published by The Washington Post:

Israeli diggers who uncovered a complex of rooms carved into the bedrock in the oldest section of the city recently found the markings: Three “V’’ shapes cut next to each other into the limestone floor of one of the rooms, about 2 inches (5 centimeters) deep and 20 inches (50 centimeters) long. There were no finds to offer any clues pointing to the identity of who made them or what purpose they served.

The archaeologists in charge of the dig know so little that they have been unable even to posit a theory about their nature, said Eli Shukron, one of the two directors of the dig. “The markings are very strange, and very intriguing. I’ve never seen anything like them,” Shukron said. 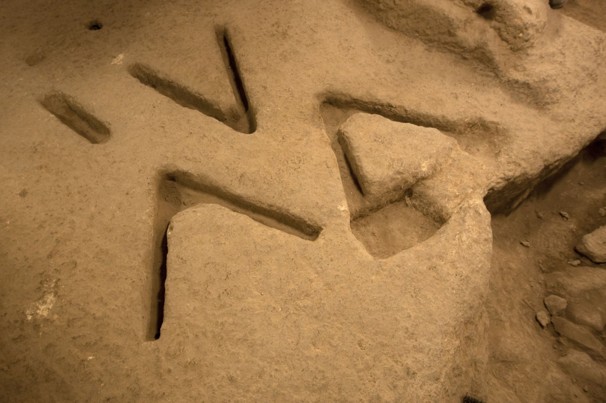 Archaeologists do not know whether the “V” shape carvings were made by one of the Judean kings or by the original Canaanite inhabitants of Jerusalem who lived in the city before it was conquered by David.

The article in The Washington Post provides additional information about the discovery and several pictures of the markings.

This entry was posted in Archaeology and tagged Archaeology, City of David, Eli Shukron, V Shaped Carvings. Bookmark the permalink.